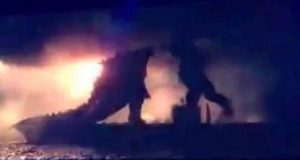 Godzilla is much larger than King Kong, but their scale has been somewhat adjusted for this upcoming movie

Godzilla and King Kong are now the same exact size in the MonsterVerse as revealed in the first ever Godzilla Vs Kong footage from CCXP. Warner Bros. arrived with a very brief amount of footage. Short though exciting, the first look footage showed the King going into punch Godzilla in the face, and it got the crowd cheering, with the anticipation of what’s to come in this big monster brawl.

No one was expecting Warner Bros. to show off anything from Godzilla Vs. Kong at CCXP, so this certainly came as a huge surprise. The footage was shown right before the big Wonder Woman 1984 panel was set to kick off with a livestream. Even though Diana Prince is one of DC Comics favorite superheroes, these two monsters might have just stole the show.

The image shows King Kong going in for a quick punch to Godzilla’s face, which proves these two aren’t friends. Kong isn’t bowing down to the big lizard in this epic battle to end all monster fights. This could be bigger than Avengers: Endgame, with all monsters expected to jump into this melee.