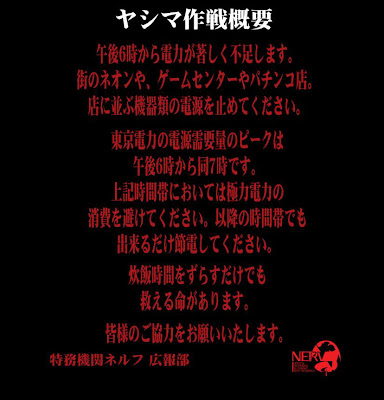 The Tokyo Electric Power Company (TEPCO) is calling on people to conserve electricity after the March 11 earthquake (Tōhoku Chihō Taiheiyō-oki Jishin) and tsunami; an unofficial campaign to spread the word has been nicknamed after Evangelion by its promoters.

TEPCO forecasted on Saturday that it will have a power shortfall of 1 million kilowatts between 6:00 p.m. and 7:00 p.m. in the evening. The company predicts that there will be a demand of 38 million kilowatts during that hour, but it can only supply 37 million kilowatts due to several power plants being offline or not fully operational. The shortfall is equivalent to the power used by 300,000 households.

In response to this, an unofficial campaign to conserve electricity has begun under the name “Operation Yashima” on the Twitter social networking system. In the Neon Genesis Evangelion anime, the Evangelion units defeat an enemy with a sniper rifle that saps the entire power grid of Japan. The campaign uses the hash tag “#yashimasakusen110312” for identifying posts.

The earthquake and tsunami surges struck a nuclear plant in the northern prefecture of Fukushima, and workers are attempting to cool the reactor’s fuel rods. However, the Nuclear and Industrial Agency said on Saturday that there is a strong possibility that a meltdown of a fuel rod has already occured, although it assured the public that there is no immediate danger. The agency also confirmed later in the day that four people were injured in an explosion at the plant.

The promoters opened a page with a bulletin about the real Operation Yashima from Evangelion’s fictional Nerv organization.