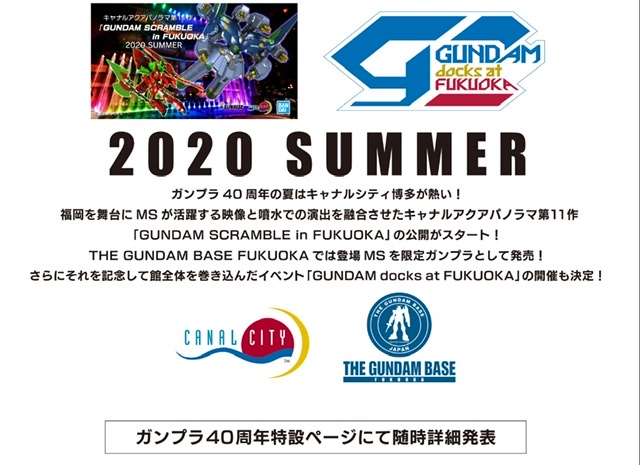 The postponement of the “GUNDAM docks at FUKUOKA” scheduled to be held in the summer of 2020 has been decided.

We have carefully prepared for the event “GUNDAM docks at FUKUOKA” scheduled to be held in the summer of 2020, but customers who visit the venue due to the spread of new coronavirus infections  We would like to inform you that we will unavoidably postpone as a result of discussing the health and safety of the cast and everyone concerned first.

At the same time, the Canal Aqua Panorama “GUNDAM SCRAMBLE in FUKUOKA”, which was scheduled to be released at Canal City Hakata at the same time, was postponed after the discussion with the facility.

The timing of the event and the release date of the limited items are currently undecided.  As soon as the decision is made, we will announce it again on the Gunpla 40th anniversary special page in the Bandai Hobby Site.  (Special URL for Gunpla 40th Anniversary: ​​https://gunpla40th.bandai-hobby.net/)

* The event may be canceled depending on the spread of new coronavirus infection.