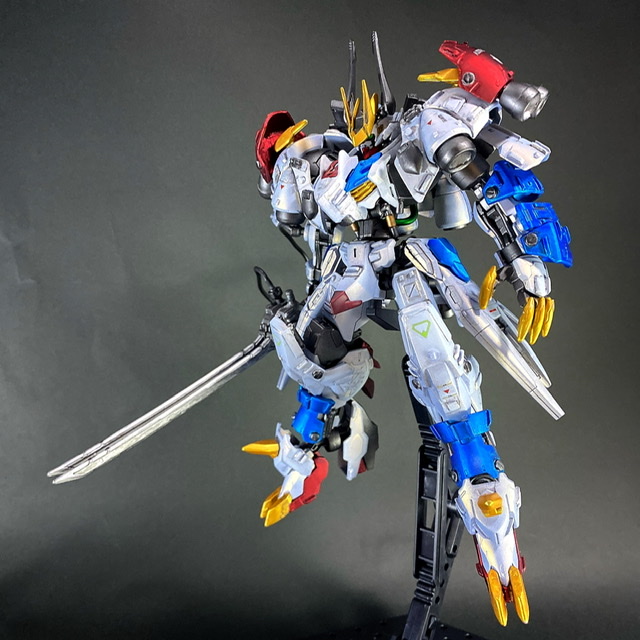 PS sorry for translation not so good, from Japanese:

Gundam Barbatos was destroyed in the Battle of Edmonton.

One of them that was designed as a candidate for the repair machine.  (Since LUPUP was adopted as a result, only the design data currently exists)

The aircraft uses a Valkyria frame, and instead the Barbatos Ahab Reactor has been diverted to the main weapon, the Two-Sword.

With 10 verniers in total, maneuverability has been greatly improved.

It should be noted that this aircraft was designed on the assumption that another passenger (details unknown) is the passenger, not the original passenger Crescent Moon/Augus.

Therefore, in contrast to the armed Barbatos specialized in crushing the opponent, this is a fuselage design with emphasis on slashing.

The main weapon of Gavnas.

It is usually mounted on the back and used by connecting it to the right arm with a cable.

However, due to its special operation method, the passengers are forced to bear more physical load than the Gundam frame.

Although it is possible to cancel the limiter, it was planned to prohibit the use of the limiter because there is always a high risk of becoming impossible to restart.

The back of the hand that is mounted on the left arm.

Although the defense ability is not so high, there is an advantage that only the damaged part can be replaced.

A small claw mounted on the right arm.

A knife mounted on the back.

A rinker horn is added to the head, and dowel holes are made in each part to add a little armor.

The shape of the antenna has been changed, and the wires and back have been added.

At this point I also have a sword on my back.

Furthermore, heaped up armor and armament.

Put a little more on it, and put putty on the back of the armor on the shoulders and knees.

The details are improved with a plastic board and a plastic stick.

The basics are airbrush and the fine details are brush painted.

After this, put in Sumi → decal → frost and it will be completed eventually.

I used Bolden Arm Arms for some parts, but other than that, it was really good as it was completed by mixing only Iron Blood Kit as the first concept

PS: The name is affixed with the fertile cow Graves Gavnan in Irish folk tales 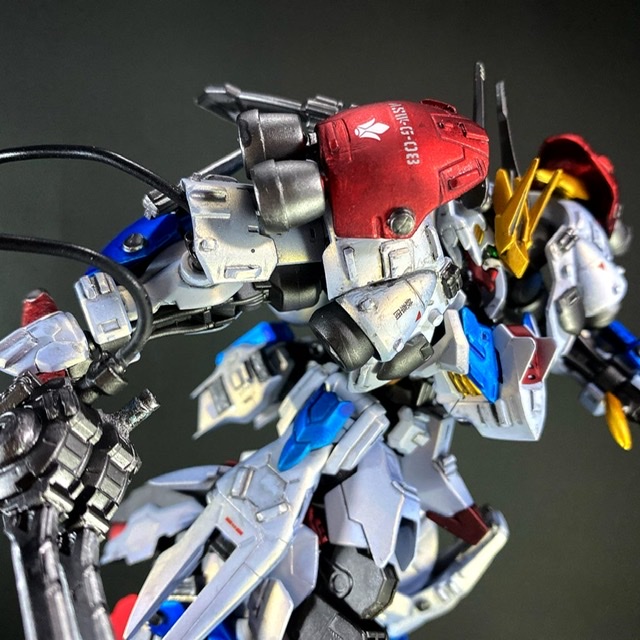 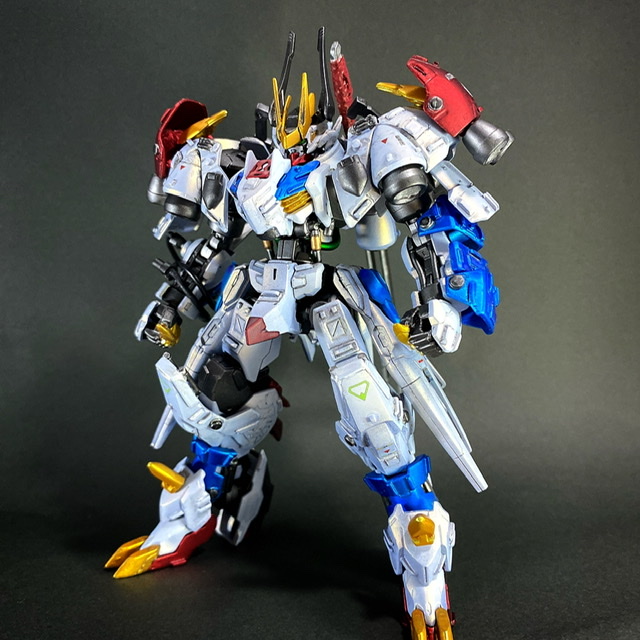 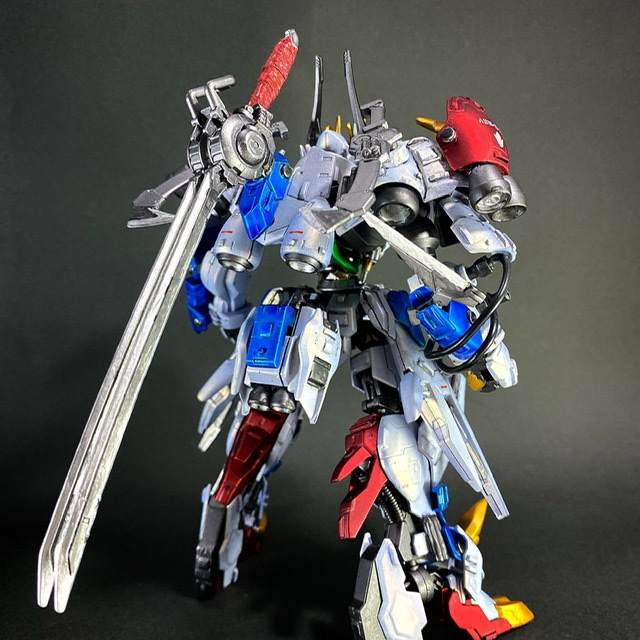 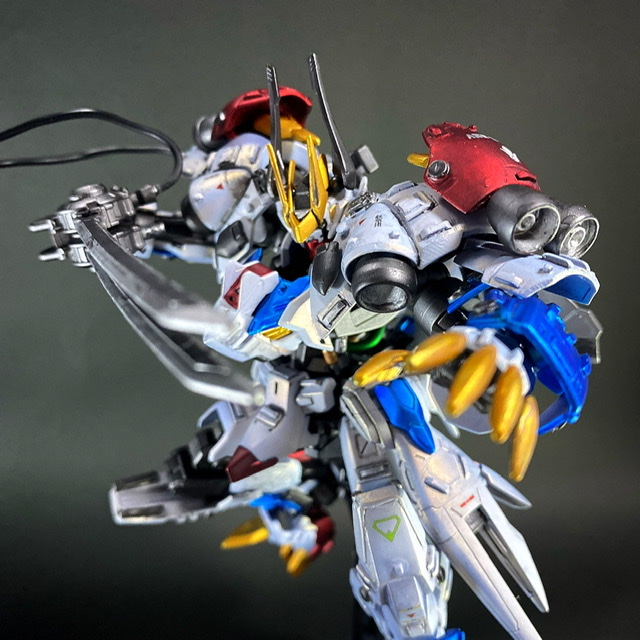 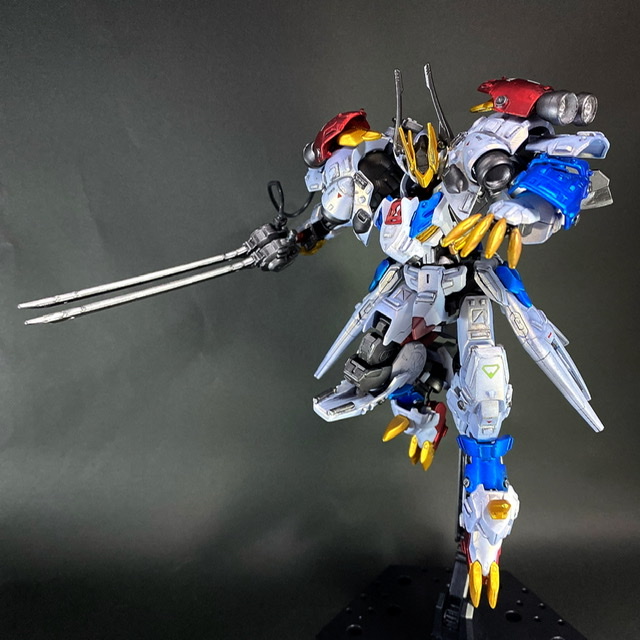 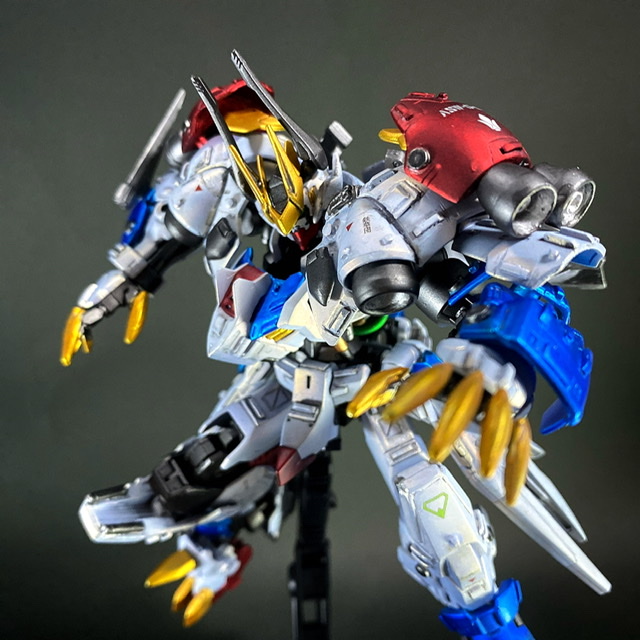 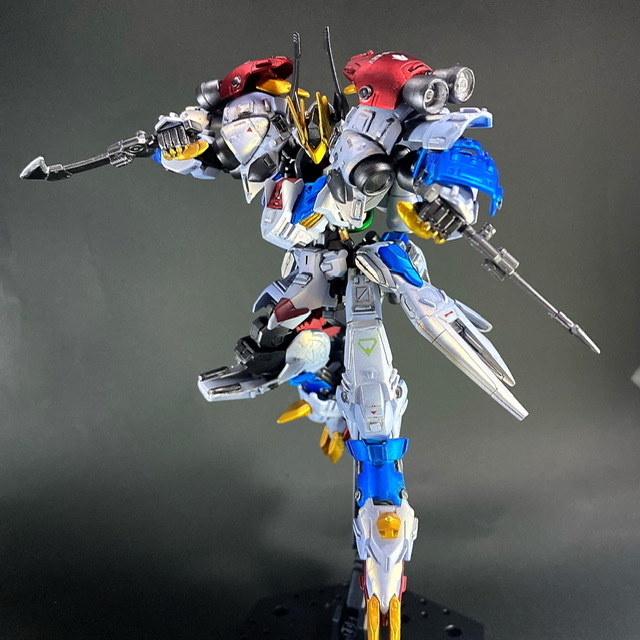 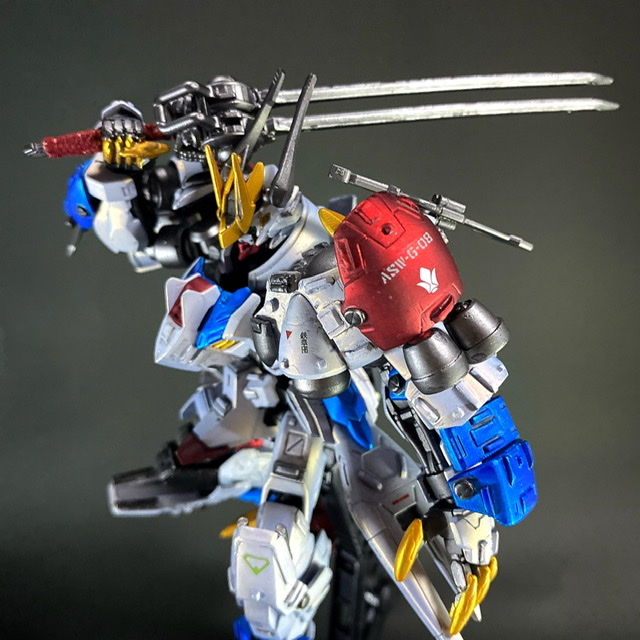 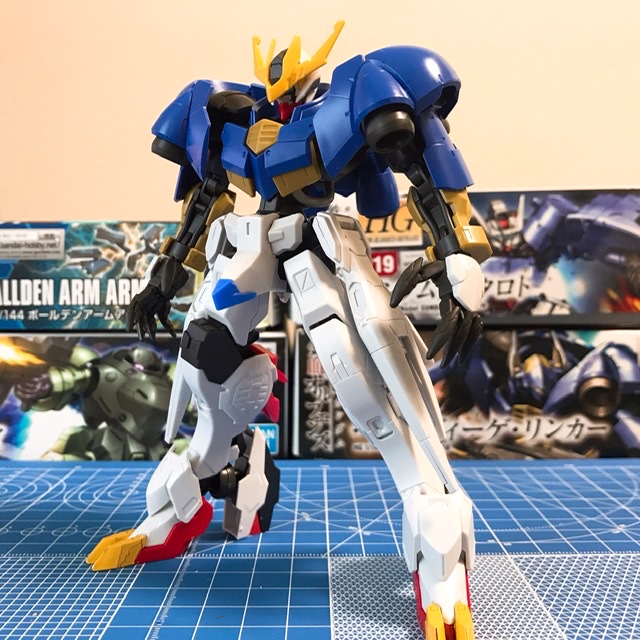 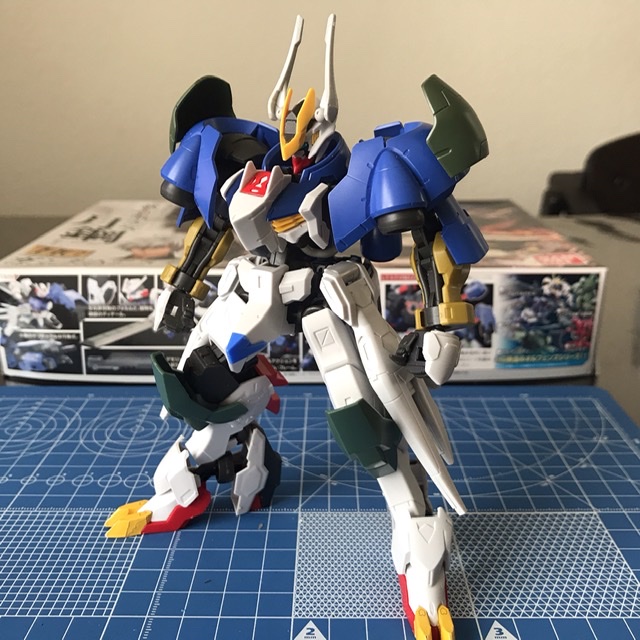 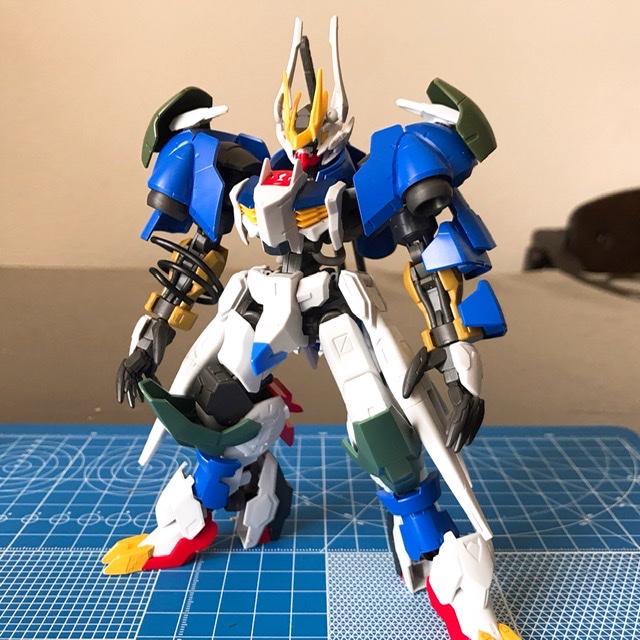 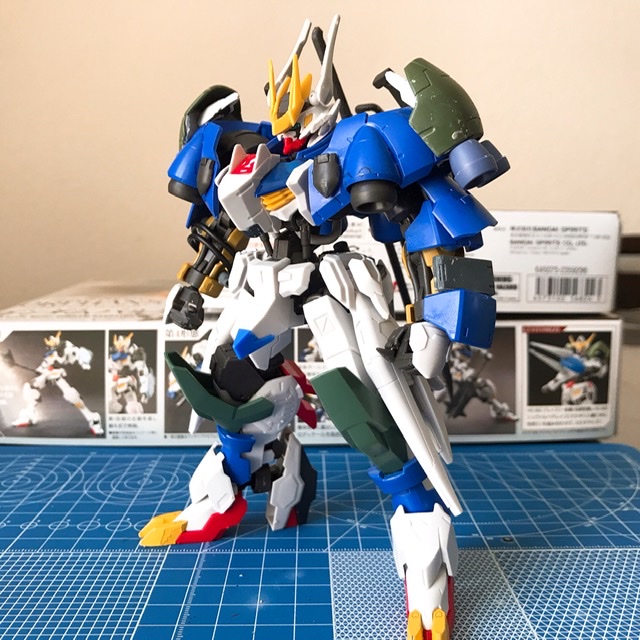 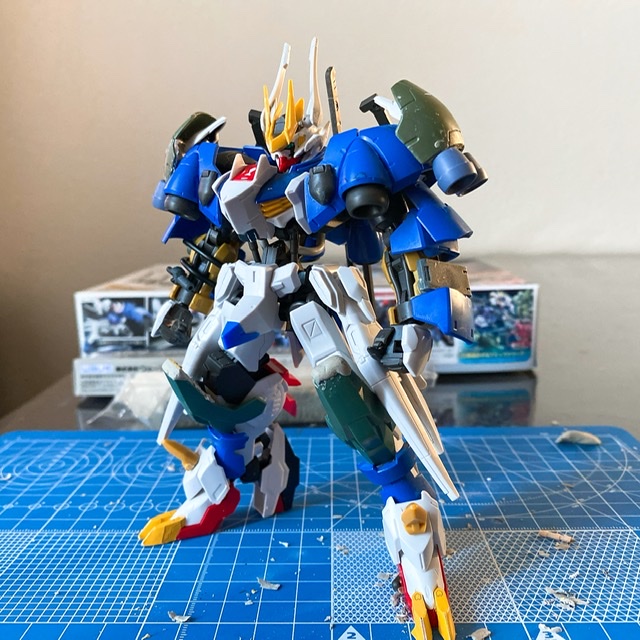 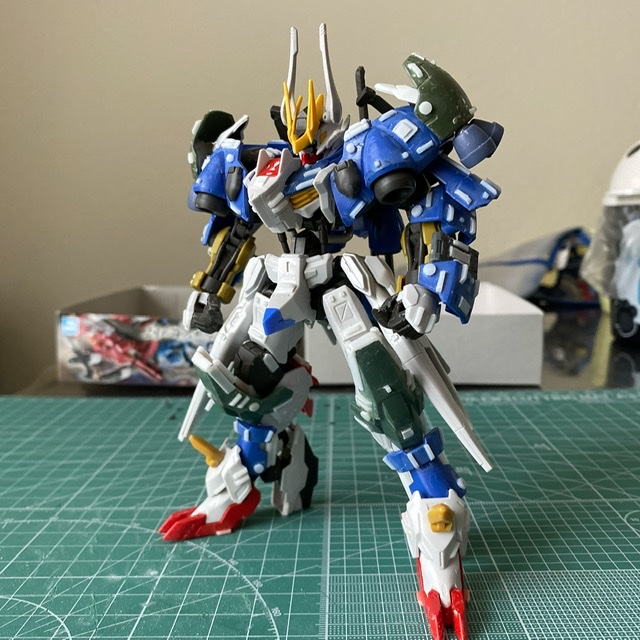 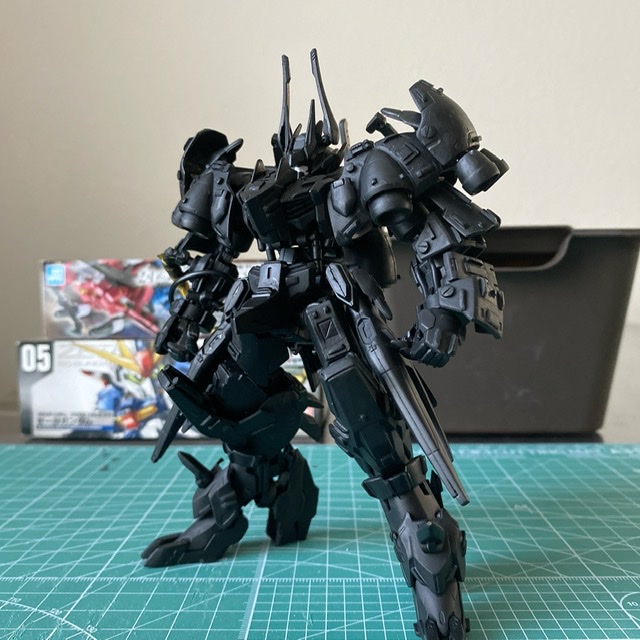 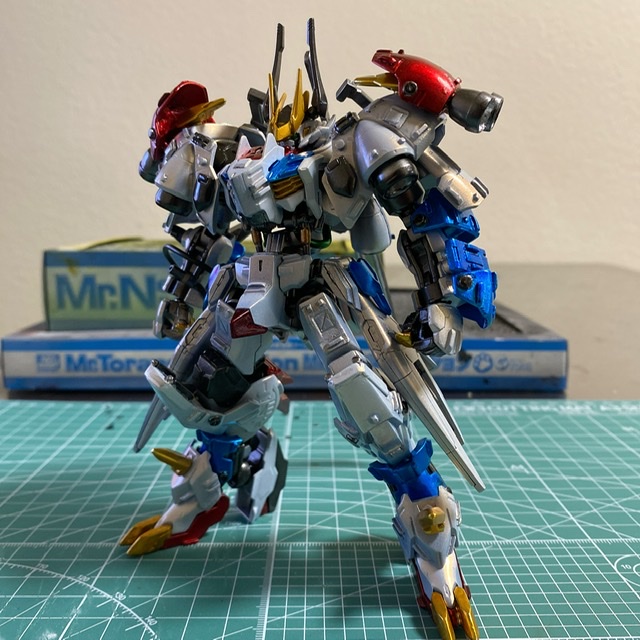