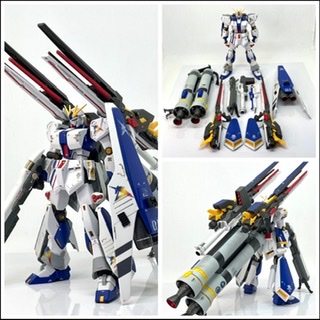 The original machine “FA-93ff Full Armor ν Gundam” made with EG Fukuoka ν Gundam.
Since I live in Fukuoka, I often go to see the statue of ν Gundam (RX-93ff ν Gundam), but every time I go, I think, “That blue is beautiful, and the red and yellow accents are also exquisite.”
Since all three EG ν Gundams I have made so far have been transformed into different ones, I made the fourth one based on the RX-93ff limited to SIDE-F to give it a Fukuoka Nu Gundam feel.
By the way, the MS “FA-93S Full Armor ν Gundam” was published in the Mook book published at the time of the release of the movie “Char’s Counterattack”, but it is completely irrelevant (after this is completed, I read back the Mook book. I noticed it by chance).

Initially, i planned to install all the additional armor of the HGUC version of ν Gundam HWS (heavy weapon system equipped type) on EG Fukuoka ν Gundam.
However, when I tried to tentatively assemble it, it became a chubby system as expected, and spoiled the slim coolness of Nu Gundam.
So, while using only some of the HWS parts, I prepared another EG Fukuoka ν Gundam and equipped it with a long range fin funnel as a twin. In addition, I decided to mount the booster, which is also limited to SIDE-F, directly on the back.

Of the additional armor of HG’s HWS, the base of the chest armor and the waist armor on the front will not be transplanted, but the others will be equipped.
As for the chest armor, I tried to attach only the “first” part, but I think it looks pretty good.
The “straight” hyper mega rifle is painted in black to make it look like it.
The missile launcher is attached to the thighs instead of the shoulders.

The amount of details are increased with a plastic board. As expected, when it comes to the 4th EG ν Gundam, I have come to understand the key points to make it cool. The challenge this time was to add a Maruichi mold to the joints of the arms and legs. I painted it in yellow and fitted it, but I think that it looks like Fukuoka ν Gundam.

Processed backpack so that twins of long range fins and funnels can be attached. The long range fin funnel itself is almost as a kit with only partial painting.

After shortening the booster, attach it to the back. “Legs” are diverted from HGUC Zeta Gundam.
In addition, the new hyper bazooka attached to HG’s HWS and the sub-arm for handling it are attached to the upper part. The sub arm is diverted from around the Thunderbolt version GM.

Lightly equipped with a new hyper bazooka on his back.

Twin long range fin funnel attached to the back.

This time I finish it with partial painting.
Blue is the water-based hobby color version of Gundam Blue, which was released around last year. I use the same series of red and yellow. The blue, red, and yellow colors of that series are good, and uneven coating is unlikely to occur, which is very good.
The decal is fully used for ν Gundam RG. In addition, the sticker attached to RX-93ff and the “sticker of the example that all Gunpla fans living in the vicinity of Fukuoka have (?) And have no use (??)” are pasted here and there. Two round ones in the propellant tank. .. ..
As usual, lightly ink with watercolors and finish with a matte top coat. 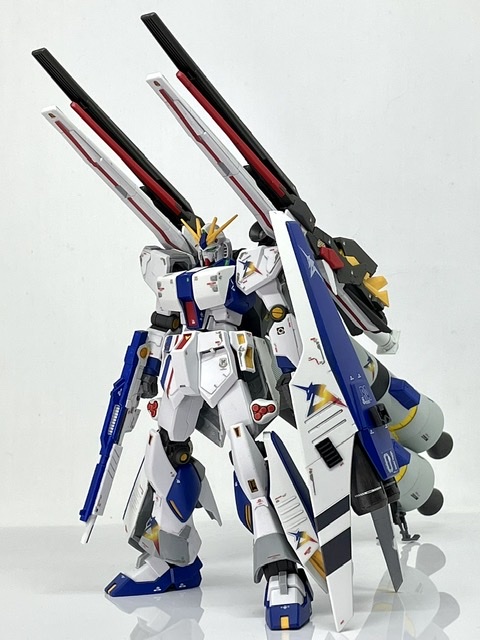 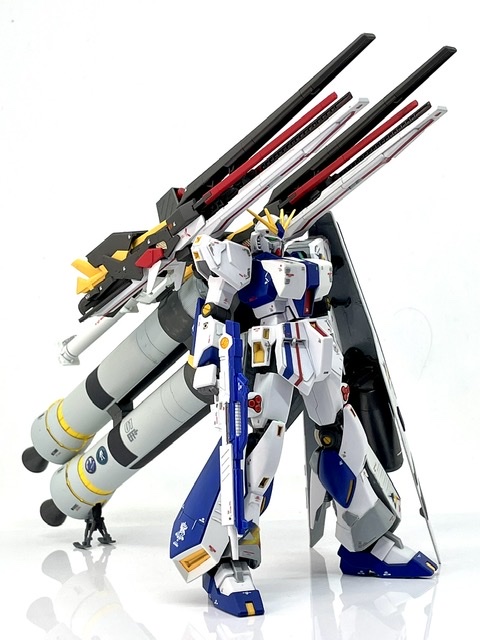 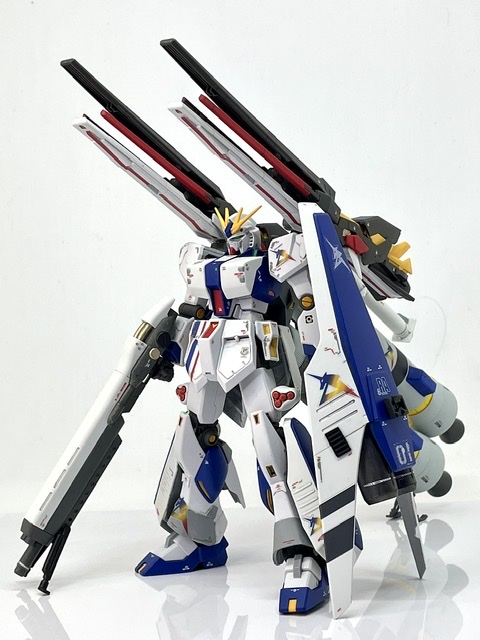 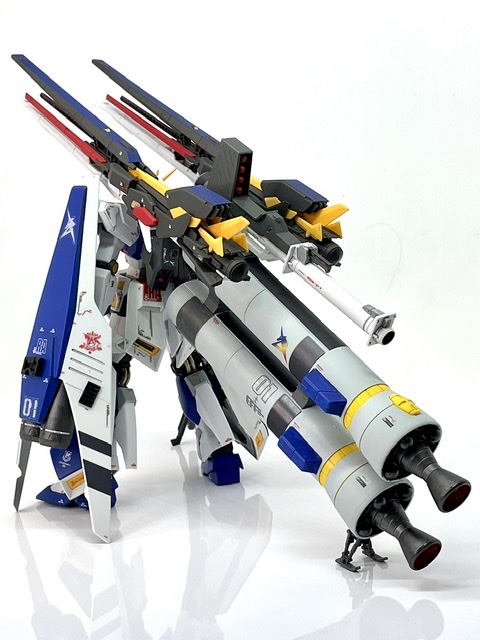 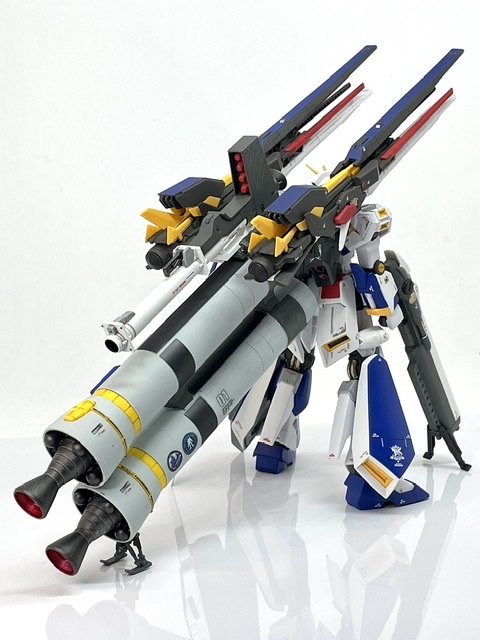 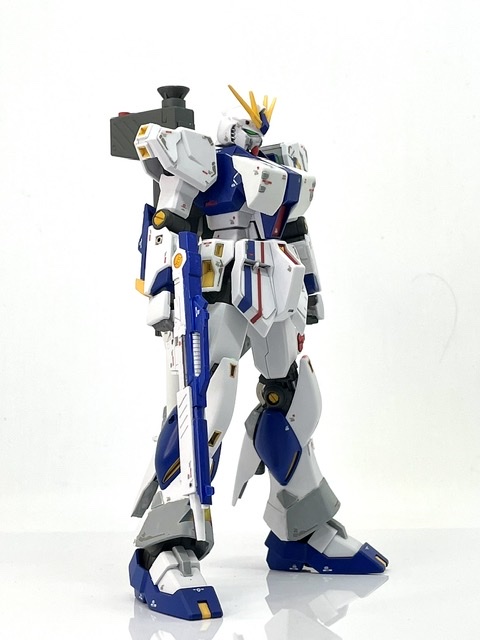 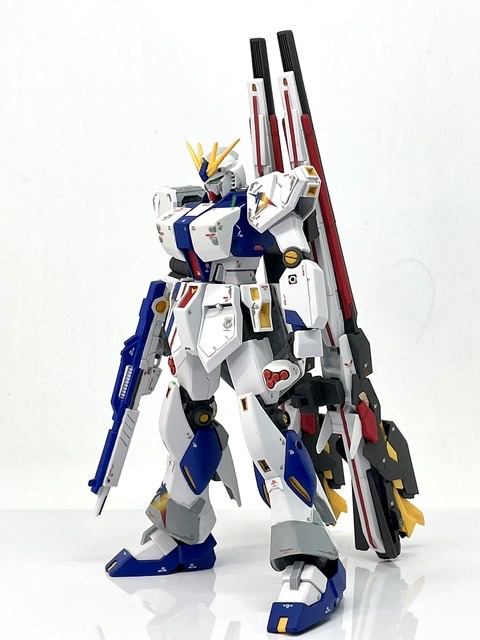 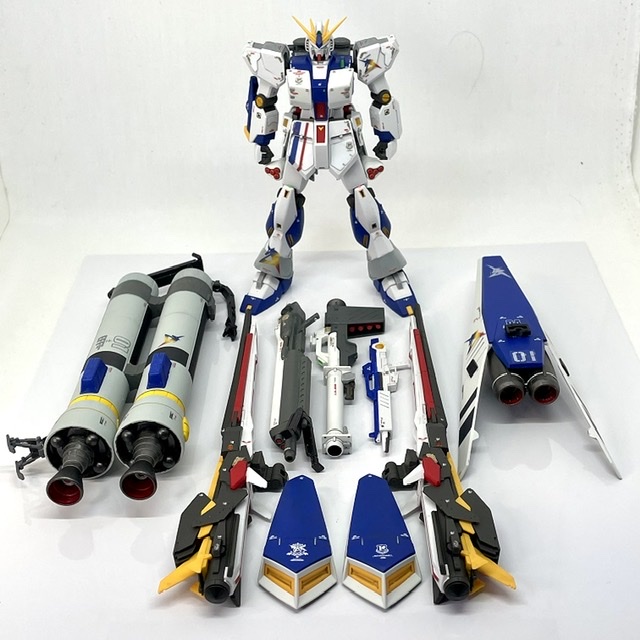 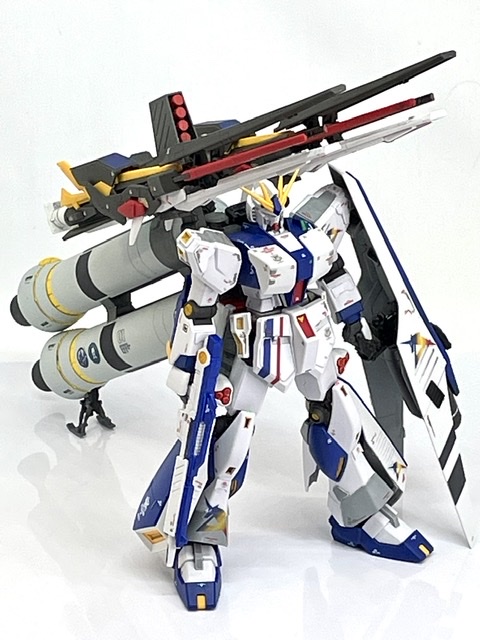 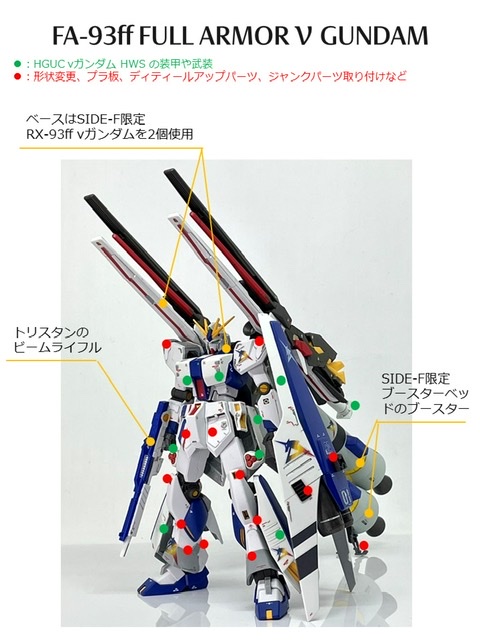 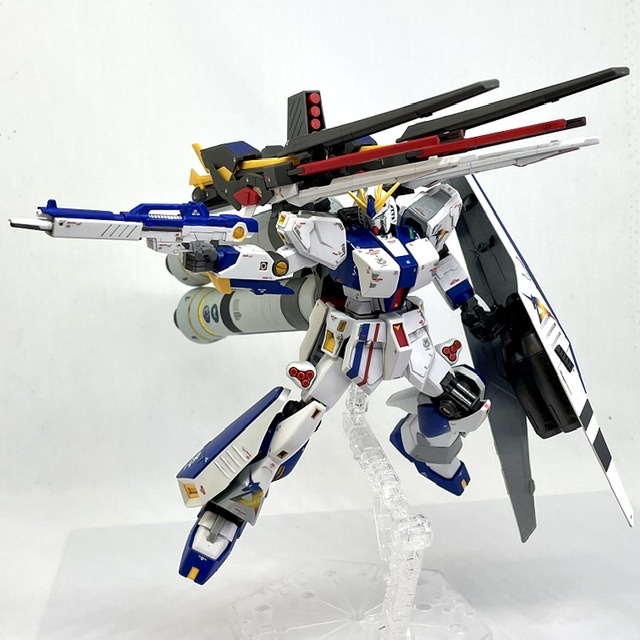 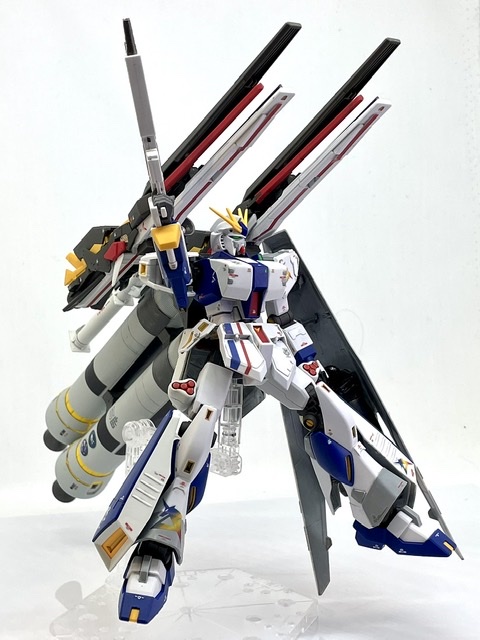 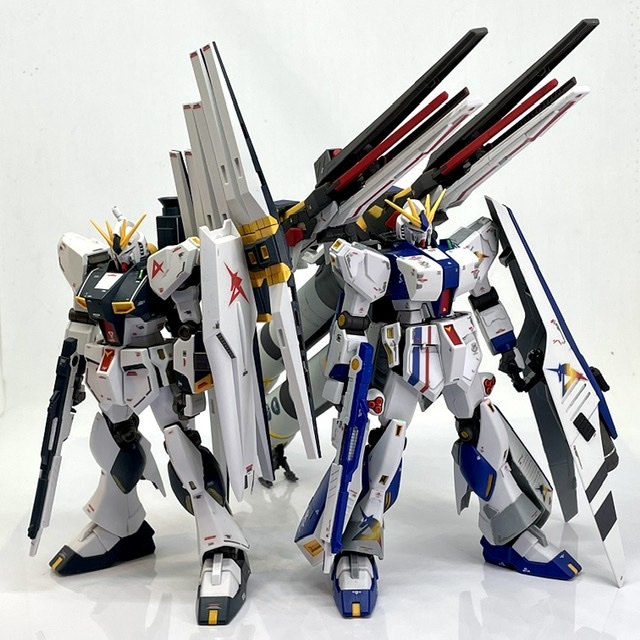