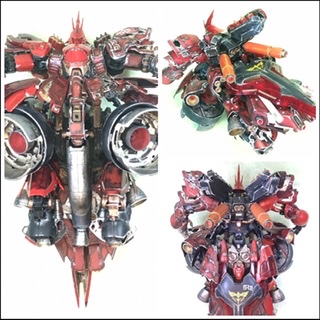 “It’s a decoration like that. Great people don’t understand that! ] survived until the one year war ~ the second Neo Zeon conflict
“I don’t need legs after all!
After coming to this conclusion, I used Sazabi’s spare parts to build the MS by myself after work.
It’s set to say that, but when I first assembled it about 5 years ago, I saw how the skirt was divided and wanted to make it look like Zeong, so I modified it.
But when I finished it, it looked like a pigeon…
Axis ukyoya Hato Sazabi

Posing showing the vernier of RG Zeong
I want to be able to do this pose, so I put joints in the hips and bend them 90 degrees.
(Details are written below.)

front
The one in the middle of the giant thruster uses the E x-S propellant tank. It’s a tank and thruster.

beside
Use the orange booster on the back for nitro.
It moves with a ball joint.

rear
I attached an internal frame to hide the plastic plate, but the waist area looks like a face.

Dove mode front (suddenly with a black bag)
I borrowed the hand parts from PG Zaku, thinking that one size larger would be more compact.
The eyes are painted with fluorescent paint.
The skirt part is a mini skirt because I wanted to rearrange the original parts without making it bigger like Zeong.
On the contrary, I wonder if Vernier stands out.

The bright red part was previously painted with the image of F1 Ferrari.
If you get tired of decorating it, you can flip it left and right to change the impression.
When I used the shield on the waist, I felt a pigeon feeling at once.

Painting
I added a strong highlight to the left part of the image, giving it a comic-like image of direct sunlight reflected in space.
The right side is left to the shine of the light.
The armor on the fin on the right side of the neck is gone, so I’m cheating with an appropriate part.

pigeon mode top
The outside of the shield is left as it is because of the practice of painting marble with a brush. I think it’s good because it feels luxurious.

favorite shot
I like this angle the most, so when I decorate it, I think I’ll use it.

First stage of production
This is the first finish I made about 5 years ago.
Around this time, I practiced with a brush so that there would be no uneven brush strokes on the surface.
One type of red shiny finish.

2nd production stage
I got a little tired of decorating it, so about two and a half years ago, I wanted to try a different color of red.

I was challenging the marble painting with the right half of the body brush painting.
Since it was the first time I did it, I couldn’t get much shade.
The left half of the body is too brushed for dry brush practice.

3rd production stage
Recently, I started remodeling because I wanted to make it look like a Zeong.

On both sides of the EX-S leg, I split the hip joint in half and connected it to both sides.
With this, the large vernier can move freely, so you can add expression to your pose.

The problem of what to do with the vernier
I used the vernier part because there was a piled base that was duplicated in Mazinger Z Infinity before. It was a good size as well.

The silver part on the ventral side fits into the horizontal axis of the copper. It was a product of chance.

Neodymium magnets are installed in 3 places, so it can be stopped with a snap.

Although the work is different, Hato Sazabi confronting Mr. 78
It feels huge with an overwhelming sense of intimidation. 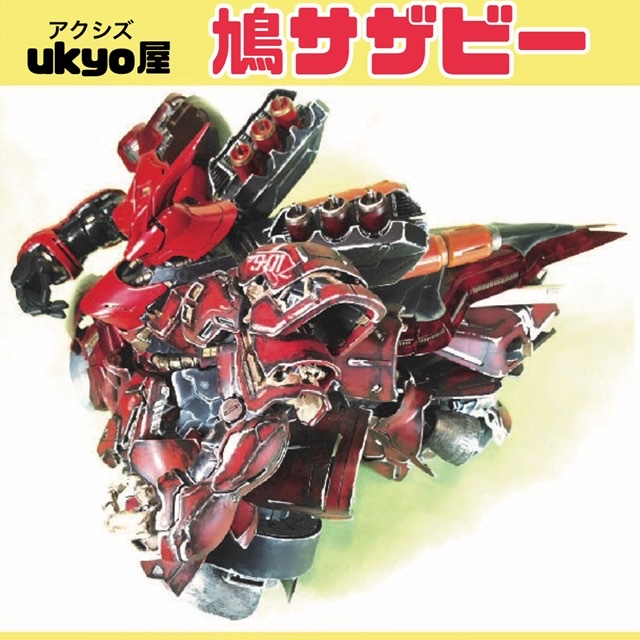 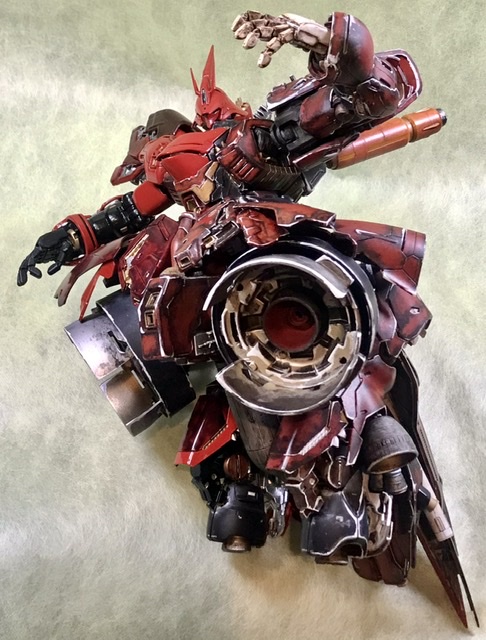 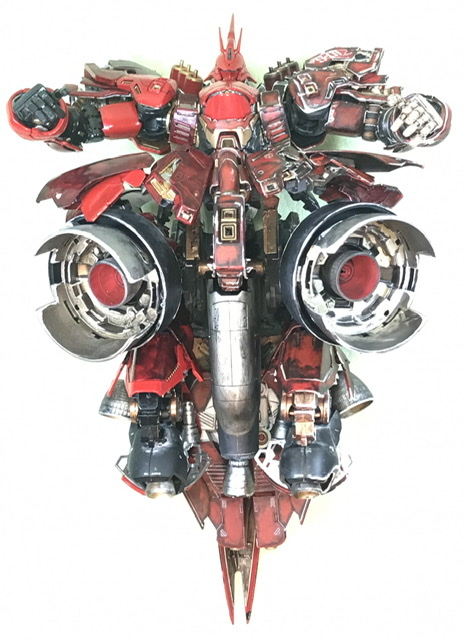 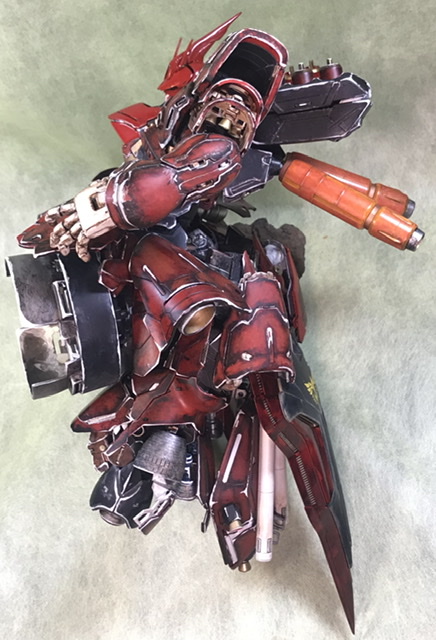 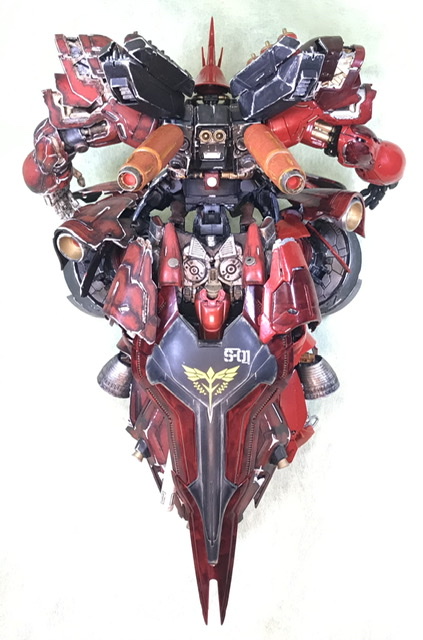 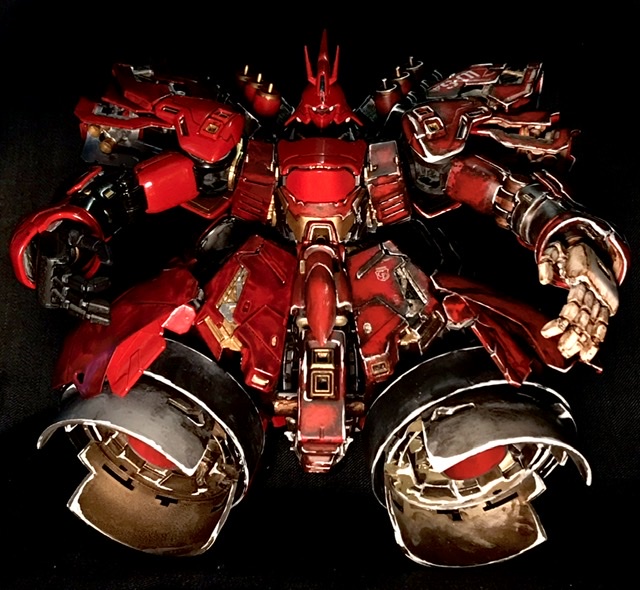 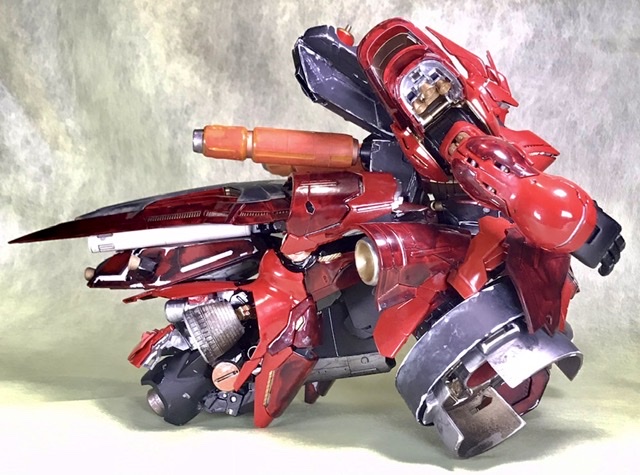 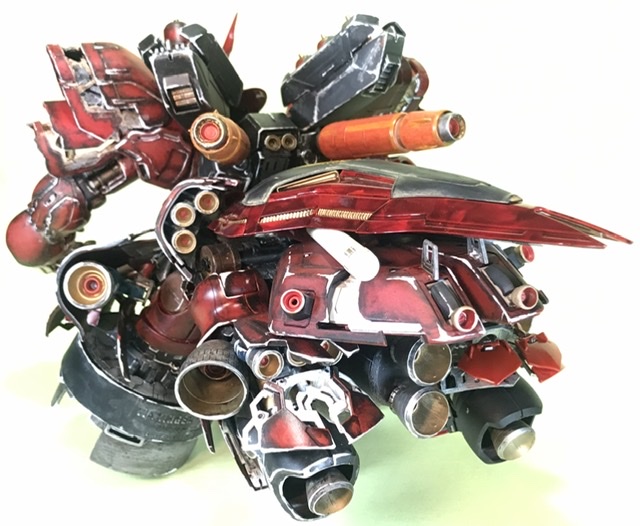 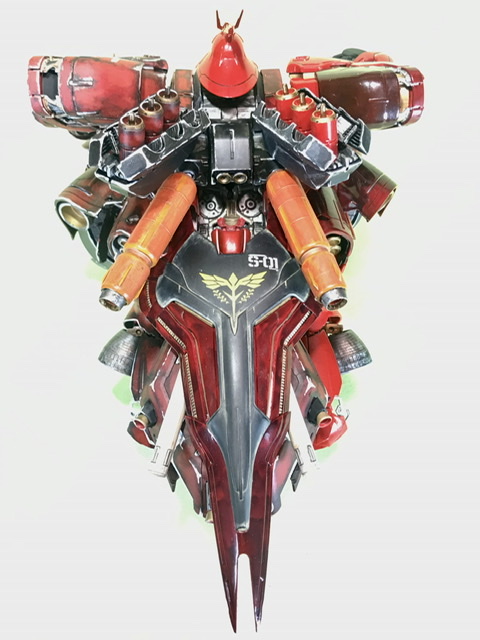 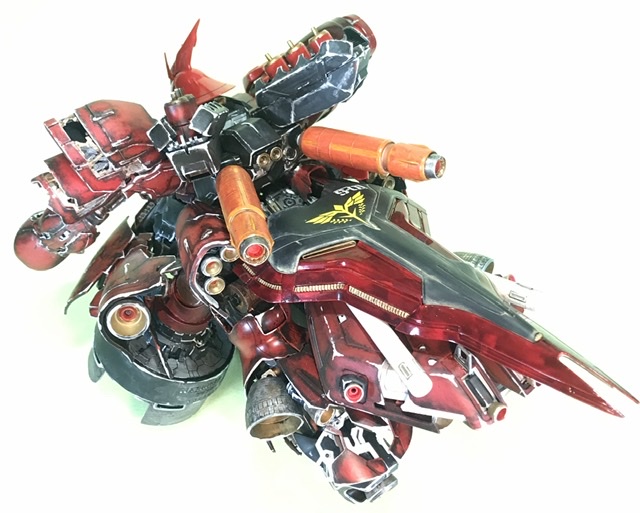 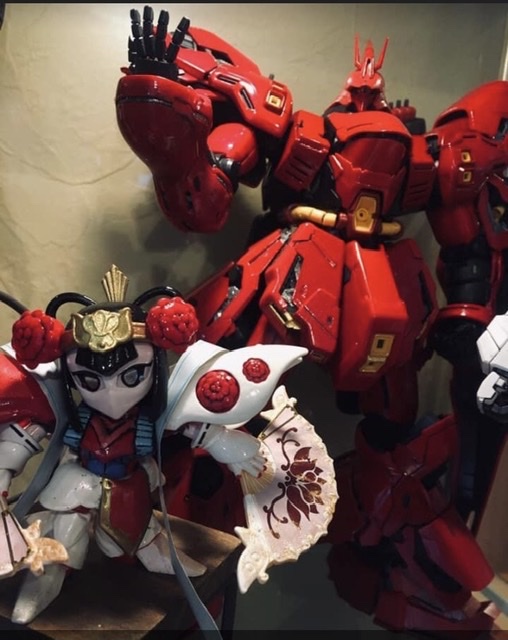 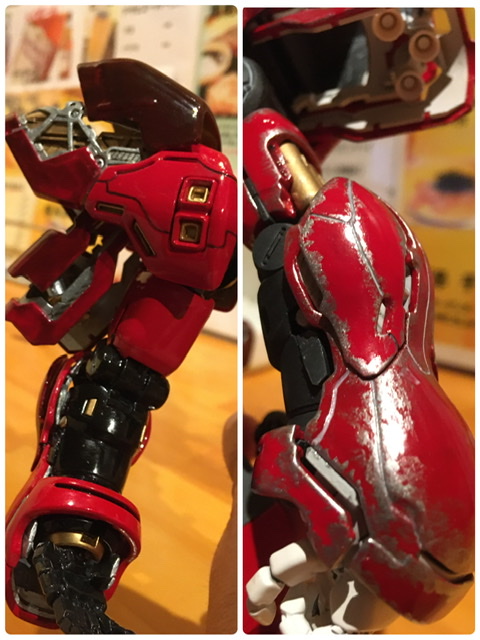 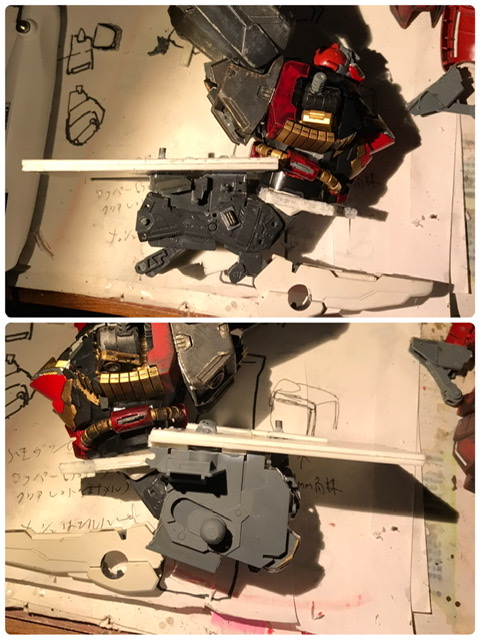 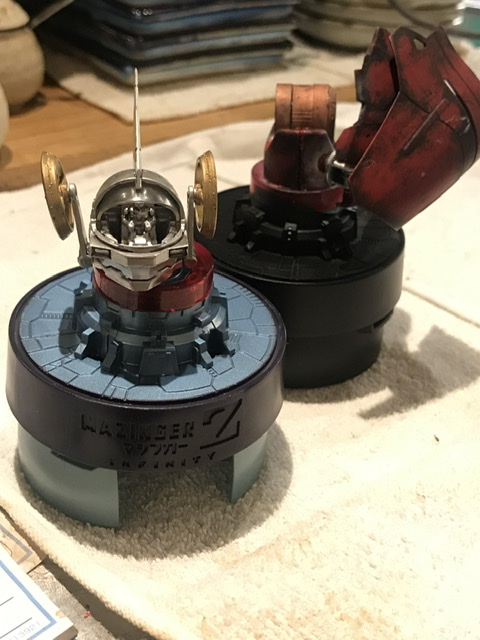 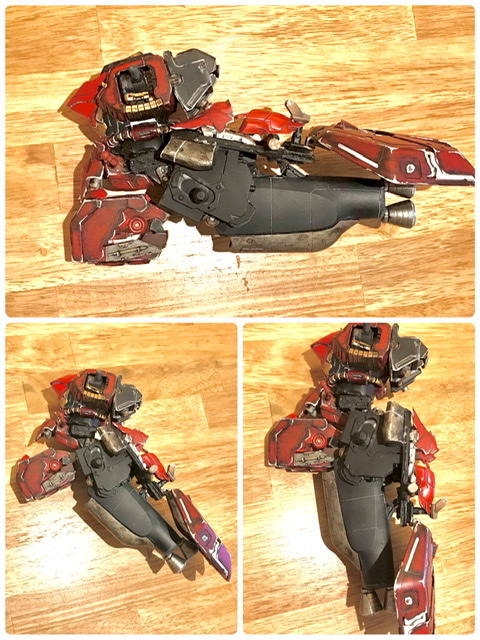 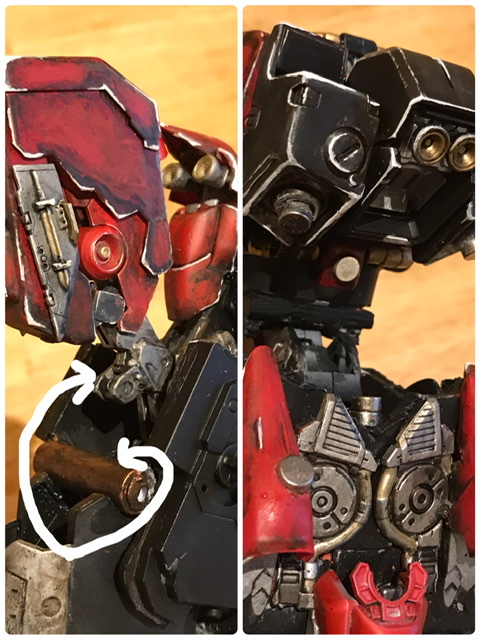 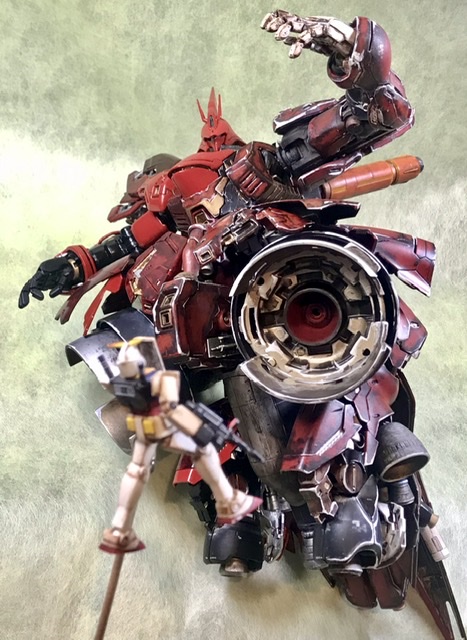