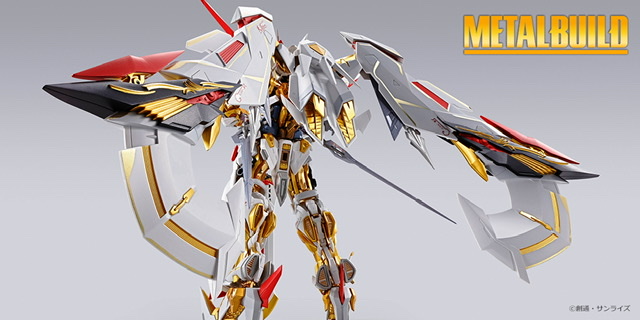 Price: 25000 yen
Release date: Scheduled to be shipped in October

The same back-mounted weapon as used by the Gold Frame Amatsu Mina. These “claws” forcefully discharge the electrical energy from the batteries of enemy mobile suits through the use of mirage colloid related technology, disabling them while at the same time recharging Gold Frame Amatsu Hana’s own battery.

Like the Gold Frame Amatsu Mina, the Amatsu Hana is equipped with a pair “Magashira no Hoko” harpoons, which are equipped with Phase Shift technology and thus can penetrate virtually any armor. Each harpoon is attached to a cable for power and recovery. Like the absorption claws, the harpoons are mounted on the back.

Inherited from the Gold Frame Amatsu Mina, the “Trikeros Kai” is armed with the triple “Lancer Dart” hypervelocity kinetic energy penetrator, and a beam rifle that can also function as a beam saber by emitting a beam blade from the rifle’s barrel. The sharp outer edges of the shield is usable as a melee weapon.

“Tsumuha no Tachi” Triple Claw
Equipped on the left forearm, the three claws extend when in use, where they are used for one of two purposes – 1) stop or rob the enemy’s weapon, 2) unbalance or stop part of the enemy’s movement. Overall, the claws are meant to neutralise the enemy’s attack while dealing little damage.

Stored on the side armor when not in use, the pair of “Totsuka no Tsurugi” sabers are shaped like rapiers and are unsuitable for slashing attacks. Instead, they are meant for pinpoint piercing attack to the joints and sensors of enemy MS. As a result, they require a high degree of skill to use effectively. When used properly, they can immobilize the enemy while dealing minimal amount of damage.