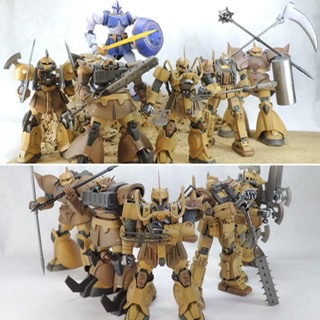 Original title: 機動戦士ガンダムサンダーボルト外伝3」登場「ロレンツォファミーリア
I made “Lorenzo Familia” that appeared in “Mobile Suit Gundam Thunderbolt Gaiden 3”.
Mobile Suit Gundam Thunderbolt Gaiden 3 Episode 18 I tried to reproduce the frontispiece of the desert rule ④. The armament and placement are based on the illustrations. While keeping the promise of sealing the joints of each MS, I make the parts where the details are not clear with my own interpretation and add the taste of my choice. The MS color is unified with Sandy Brown and Wood Brown.
The photo title is “Plan F”. The scene of attacking Gouf Sean Custom has been reproduced with a simple diorama.
The photo title is “Stolen Goods”. Originally, when Drake Hunters discovered the Big Gun, it’s unclear whether it was space or ground. Boss Lorenzo may have installed a Magella base in the service to put up for auction in the dark.
The base kit of the old Zaku is the Thunderbolt version of the old Zaku. The characteristic proboscis reminiscent of a gas mask consists of plastic plates, plastic rods, and junk parts, and the power pipe uses springs. The triple claw on the left is made of plastic material. Since I needed multiple spikes on the thigh with high precision, I duplicated them with silicone rubber and cast and used them for other MS. Of the five, the atmosphere is like the most end-of-the-century villain.
Dom’s base kit is 1/144 HG Dom. The overhang of the chest is a box of plastic boards, and the toes are made by myself using plastic boards and plastic materials.
The base of the power pipe in the abdomen is diverted from the origin version Zaku, and the power pipe is diverted from the Thunderbolt version Zaku. The arms and knees are engraved with a sharpening file to express the sealing, and the surface is trimmed with a pouring adhesive. The armament is a Gundam hammer, and the thorn mold is a duplicate of a commercially available spike modified part. The thorn on the head is a brass wire with a sharp tip, so be careful when handling it.
The base kit of GM is Thunderbolt version GM and land battle type Gundam S type. The soles of both shoulders and feet are diverted from the land battle type. The visor on the head is made from GM Nightseeker parts and plastic materials. For the chest armor, after making a skeleton with a plastic plate, a commercially available drill-shaped modified part is glued. The school bag is a modified version of the Thunderbolt version of GM. Since the club uses the barrel of Dom’s Beam Bazooka, it is hollow and light in weight. Since it has the most spikes among the 5 bodies, we use a replica made of silicone rubber and cast.
Gelgoog’s base kit is 1/144 HG Char’s Gelgoog. In the frontispiece, the half of the body was hidden behind, and the frame that appeared in the play was small, so the details were not clear. For that reason, I make the details with my own interpretation. Add a sealing mold to both elbows and knees with a sharp file. A plastic plate is attached to the head and chest to express increased armor. The characteristic giant kama was roughly sketched on a plastic board with a pencil, then cut out, connected with a plastic stick, and filed earnestly to finish it like that. Western grim reaper or devilish silhouette? I think it plays a role in producing a feeling of the end of the century.
The base kit for Zaku II that decorates the last is the Thunderbolt version of Zaku. Only the chest uses Zaku 2FII. The school bag uses the surplus parts of Origin Zaku. The heat hawks used were 7 main bodies and 2 armed, for a total of 9 heat hawks. Since the shape and size of the heat hawk differ depending on the kit, i carefully glued them so that they are symmetrical. 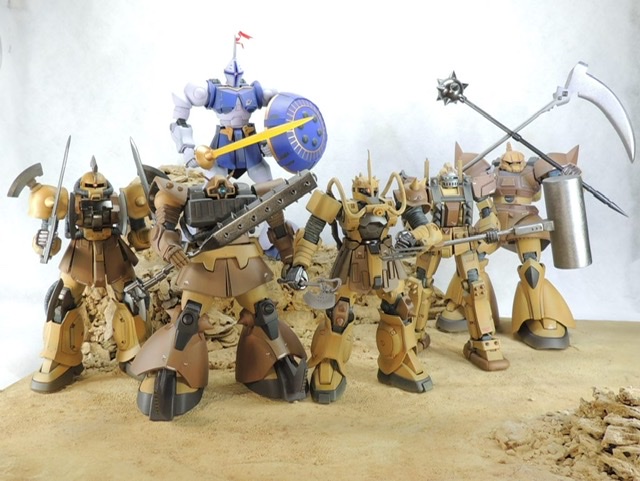 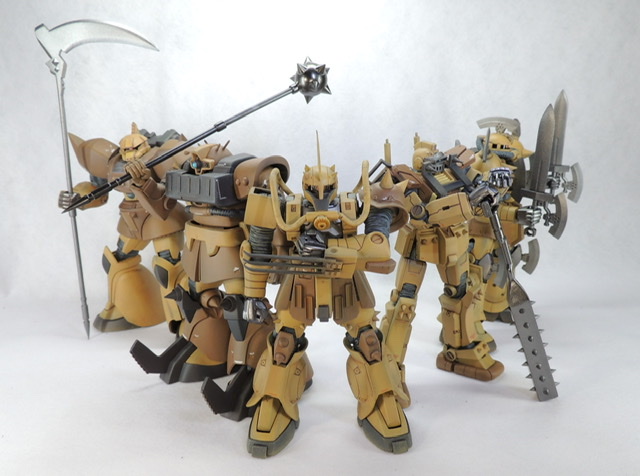 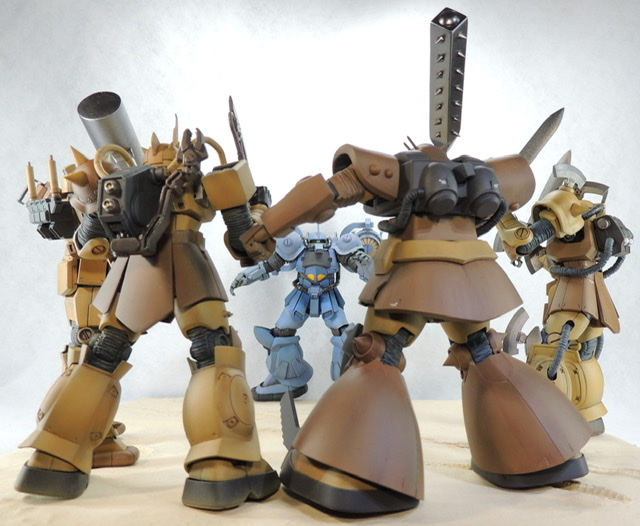 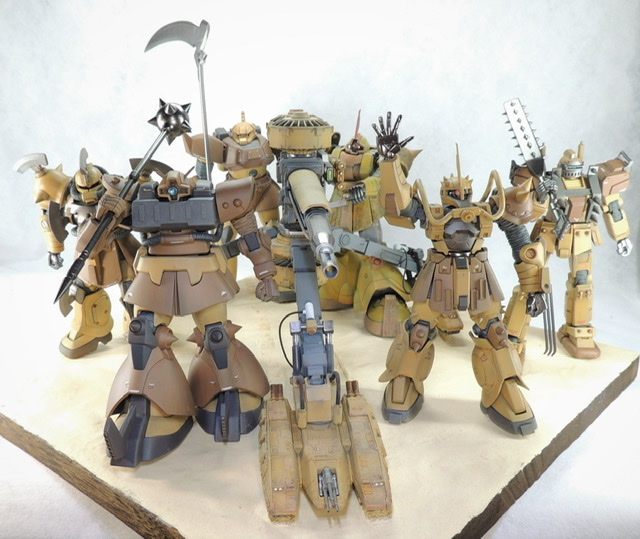 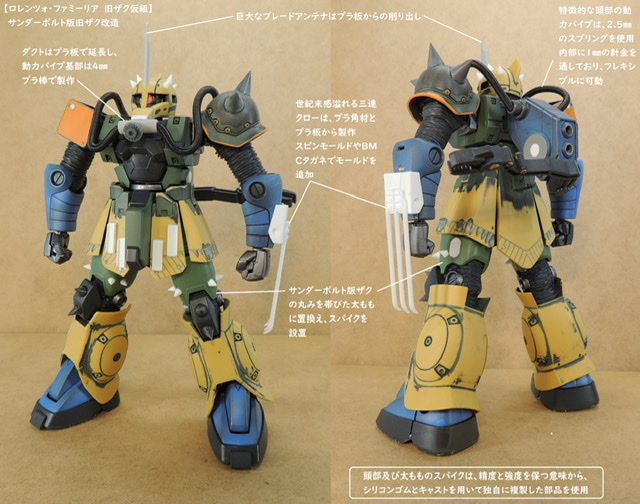 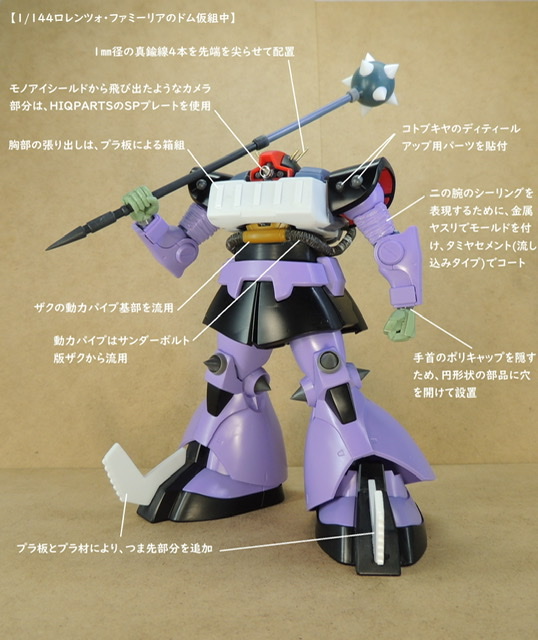 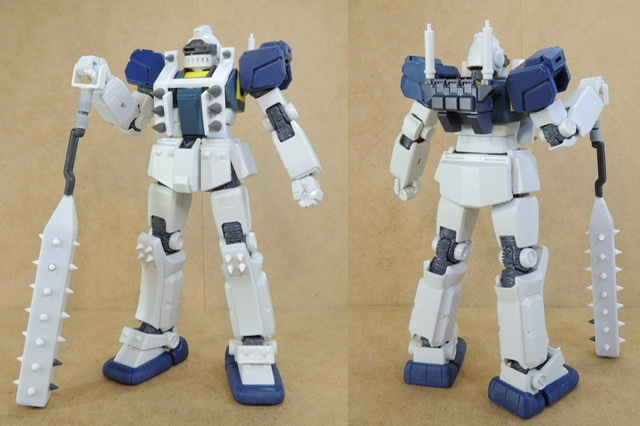 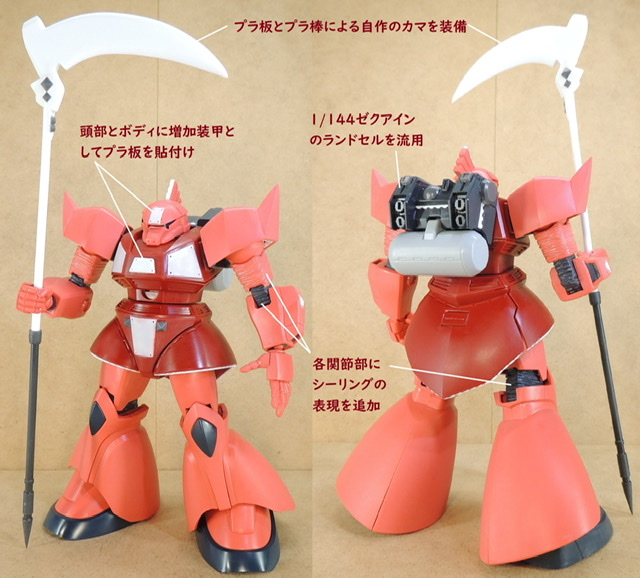