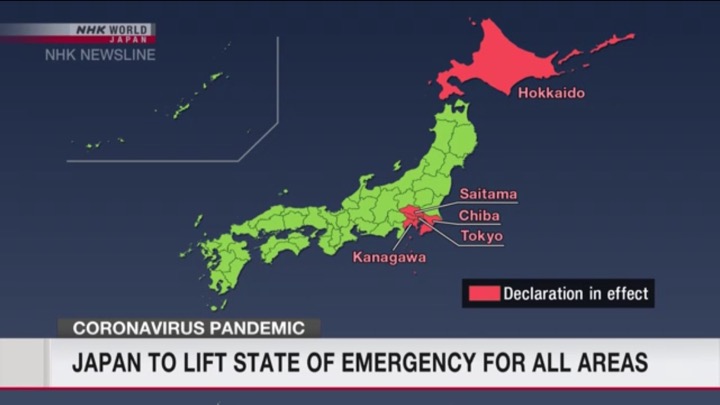 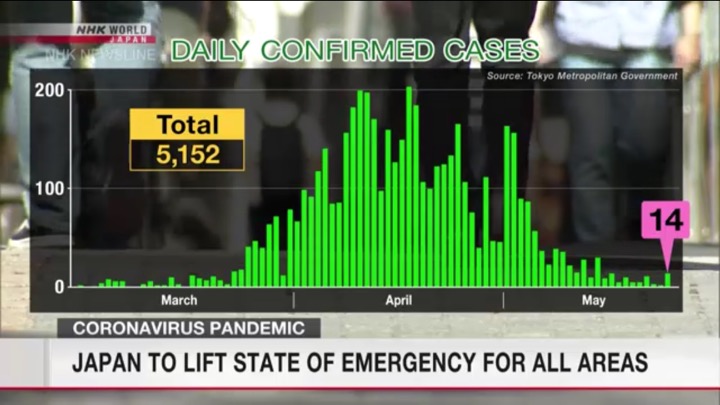 Japanese Prime Minister Shinzō Abe announced on Monday that the Japanese government has decided to lift the state of emergency for the new coronavirus disease (COVID-19) from the five remaining prefectures, thus removing the state of emergency from the entire nation as of midnight on Tuesday. The declaration came six days earlier than the previously scheduled May 31 nationwide lifting of the state of emergency. However, Abe cautioned that several guidelines will remain in place and that people must continue exercising countermeasures against COVID-19, since the disease has not been eradicated.
The five prefectures that are still under a state of emergency are Tokyo, Chiba, Saitama, Kanagawa, and Hokkaido. Abe, Chief Cabinet Secretary Yoshihide Suga, Health Minister Katsunobu Kato, and Economic Revitalization Minister Yasutoshi Nishimura met on Sunday and concluded that the rate of infections had declined in these prefectures. Abe then met with an expert advisory panel on Monday before announcing the lifting.

Last Friday, the Tokyo government outlined a three-phase roadmap for reopening. In the first phase after the Japanese government lifts the state of the emergency, museums, libraries, regular schools, sports facilities, and similar facilities would start to open, but no seating for spectators would be allowed until the second phase. Tokyo asked bars and other restaurants to close by 8:00 p.m. under the state of emergency, but would ask them to close by 10:00 p.m. after the state of the emergency ends.

The second phase could start as early as this coming weekend, but as late as three weeks from now. After Tokyo determines that the conditions are right, movie and performance theaters, tutoring and driving schools, meeting and exhibition halls, stores that offer non-essential goods and services, and similar facilities would reopen during the second phase. Then, arcades, amusement parks, pachinko parlors, manga cafés, shooting ranges, gambling venues, and similar facilities would reopen in the third phase if more of the government’s conditions are met. Also, Tokyo would ask bars and other restaurants to close by midnight in the third phase.

The maximum number of attendees at events would be limited to 50 during phase 1, 100 in phase 2, and 1,000 in phase 3. Tokyo specifically asks that live houses (smaller indoor live music venues), restaurants with entertainment (like night clubs), karaoke facilities, fitness gyms, and similar facilities with high risks of cluster infections to remain closed in any of the three phases. Tokyo will decide how to handle these venues later, based on the national government’s guidelines.
Abe declared a state of emergency in Tokyo, Kanagawa, Saitama, Chiba, Osaka, Hyogo, and Fukuoka from April 7 to May 6. Kyoto Governor Takatoshi Nishiwaki asked the Japanese government on April 10 to add Kyoto to the state of emergency. Aichi Governor Hideaki Ōmura similarly asked the Japanese government on April 16 to add his prefecture to the list, and then independently declared a state of emergency on April 17. Hokkaido had lifted its own three-week state of emergency on March 19, only to declare a second state of emergency on April 12.
Abe then announced on April 16 that the national government expanded the state of emergency nationwide until May 6. As required by the newly enacted law that allowed for this declaration, Abe met with the government’s COVID-19 task force of experts before formally announcing the expansion. The government later extended the state of emergency to May 31, but two weeks lifted it from 39 out of 47 prefectures, and last week lifting the state of emergency from all but five of the prefectures.
As of Sunday, Japan has reported 16,550 cases of the virus (not including 712 cases from the Diamond Princess cruise ship), with 820 deaths (not including 13 deaths from the Diamond Princess cruise ship).