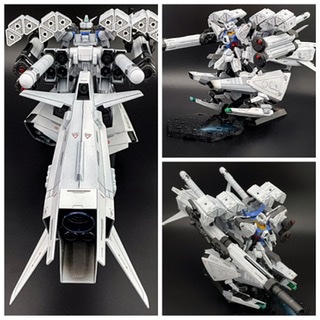 AGE-1 Halzion is a special wear developed by the AGE system for base capture and fortress defense. It has been developed as a defense measure against battleships with stealth ability (invisible umbrella) in addition to strong armor including the huge mother ship possessed by Vegan, and most of the weapons loaded in large quantities are 1 to 1 other than hand-to-hand combat. It is what you expected.
The concept of the wear is to move at high speed to the range, collect enemy and environmental information with the high-precision sensor on the left side of the MS, overwhelm the MS with missiles, etc., and aim at huge targets such as battleships with the Dodds Cannon on the right side of the MS.

The back is an armed booster, and it can be said that it is an armory where most of the weapons are concentrated, and it is connected to the waist of the main body.
Various weapons are attached around the booster for Gaplant (I am using the single release version of Premium Bandai).

Mega Dods Cannon
Seriously the largest armament boasting nearly seven times the power and range of a Dodds rifle. If you hit it directly, even the battleship will be silenced with a single blow, but the energy consumption is huge and you can not fire continuously. It folds when moving at high speed.
I am using the Extreme Cannon of PS4 game benefits.

High precision dual radome sensor
A radome sensor for searching for enemies and collecting environmental information. It also functions as a shooting camera and is also used to guide missiles.
With Kotobukiya parts as the axis, detail up with lens parts etc. with reference to MG deep striker etc. Originally it is a part corresponding to the I field generator, but since there are almost no equipment such as barriers and fields on the AGE world line, I decided to make it an aggregate of sensors.

Missile container
A container for carrying various small and large missiles. In addition to boasting a high hit rate and annihilation power by locking multiple targets in conjunction with the radome sensor, it is also possible to expose battleships that are deploying stealth by bombing over a wide area. The appearance of the hatch unfolded is like a flower, and this figure is the origin of the wear name Halzion.
This uses Kotobukiya’s missile pod.

Leg Weapon Booster
It is a booster with a built-in generator, and consists of a directly connected beam cannon and a lower sigle claw. The cannon’s line of sight is limited to the front, but it is also powerful and can be fired continuously. The Sigle Claw can attack as if tearing the target while moving at high speed, and when deployed, the beam gun is exposed and used as a check. The beam saber can also oscillate, and the long saber cuts off the MS in an instant.
The booster is from Messala and the claw is from Avalanche Exia.

Rear booster elimination
High-speed battle using leg boosters is possible. Before being eliminated, equip the rifle attached to the right side of the booster to shift to a shooting battle where you can hear a small turn.

When I got Bukiya’s multi-missile pods normally, I bought more than one, and after a few years thinking that I could make something like Dendro, I finally decided to start working on it. I made full use of the various parts I got during that time, but this booster was really big and I was surprised.

WIP:This is almost the prototype. I was worried about what to do with the parts that correspond to the dendrobium claws, and I was thinking about not attaching them, but I borrowed the dash unit because Avalanche, which I do not remember when I bought it, was waiting in the stacking plastic. bottom.
Body. Increased parts on the crotch and shoulders. Bukiya’s fin parts are used for the crotch, and a part of the strengthening unit for Geminass is used for the shoulders. By the way, the leg booster cannot be removed. I couldn’t clear the strength problem when I made it removable, so …

Size comparison between the right side and the unassembled Guncannon.

The back of the main body.
The part that originally contains the joint that suspends the Sigle Blade has been adjusted so that the booster can be connected.

Beam saber.
As an aside, this time I painted the pedestal because it is impossible to stand on its own and a stand exhibition is essential. I finish it with space painting. Comet and Mars are somewhere, so please look for them if you like.

Thank you for watching 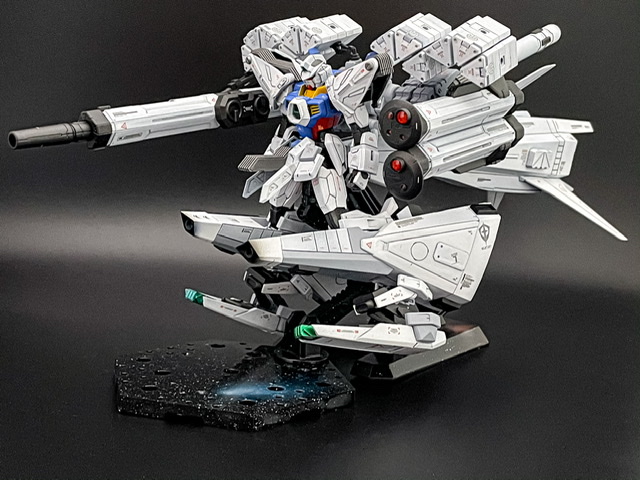 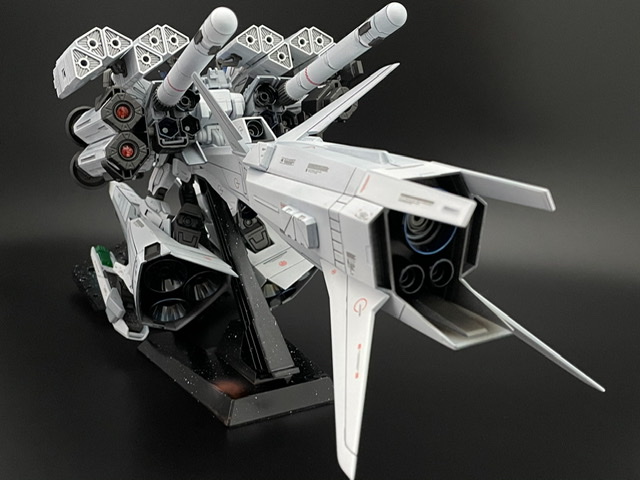 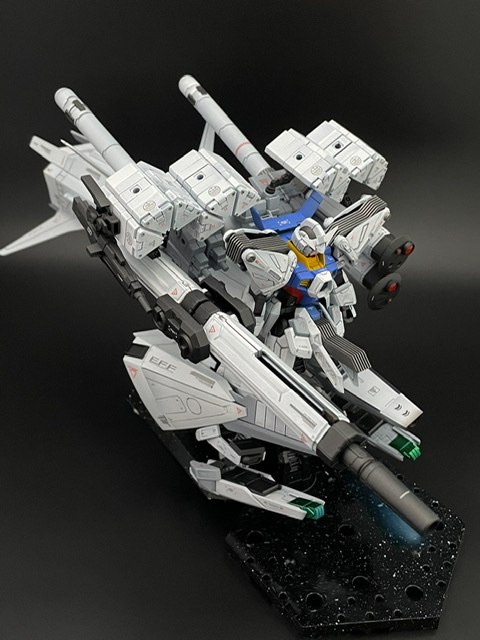 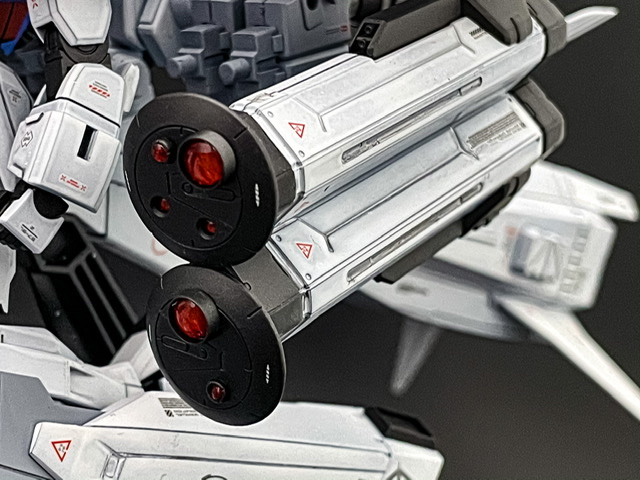 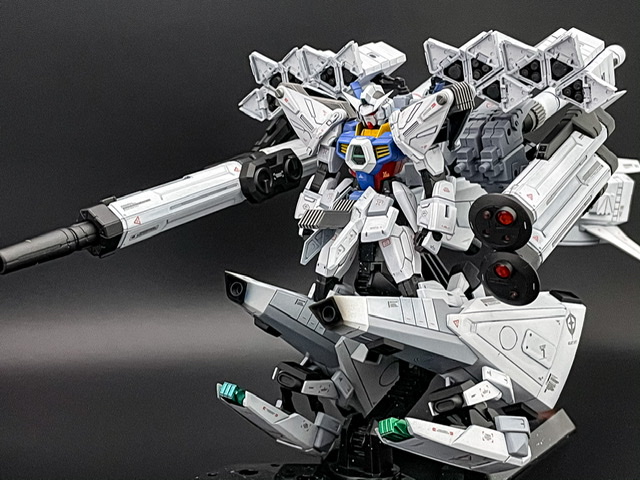 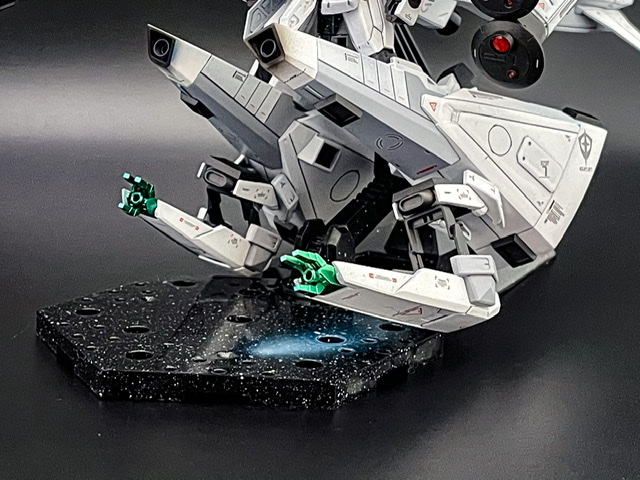 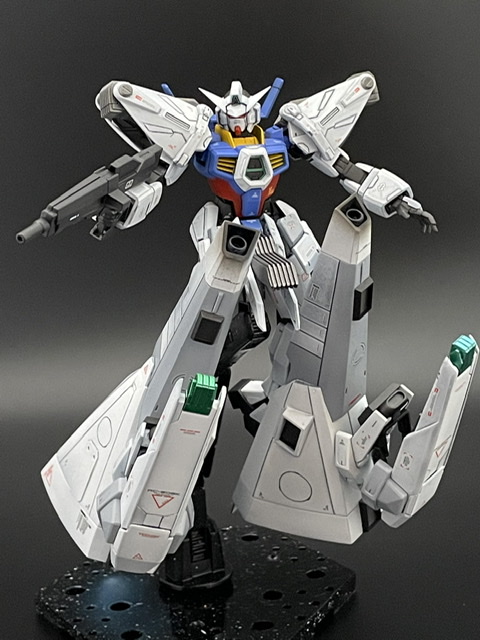 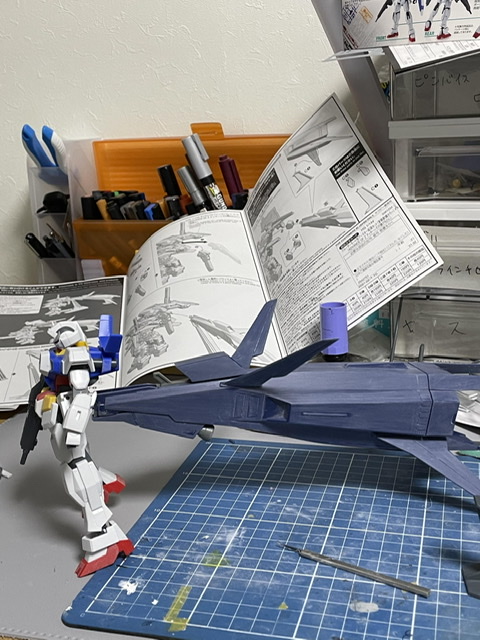 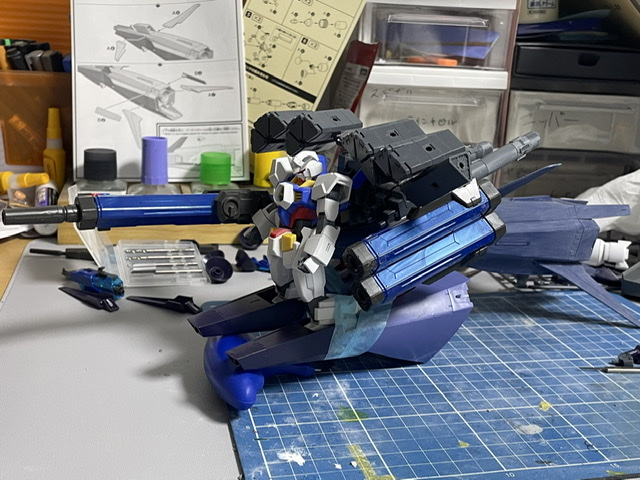 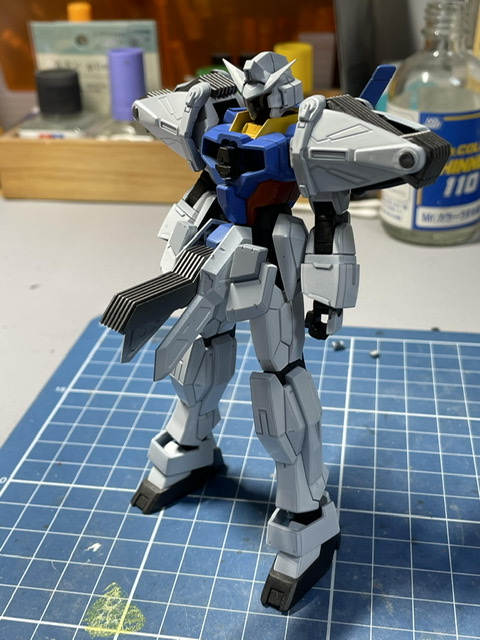 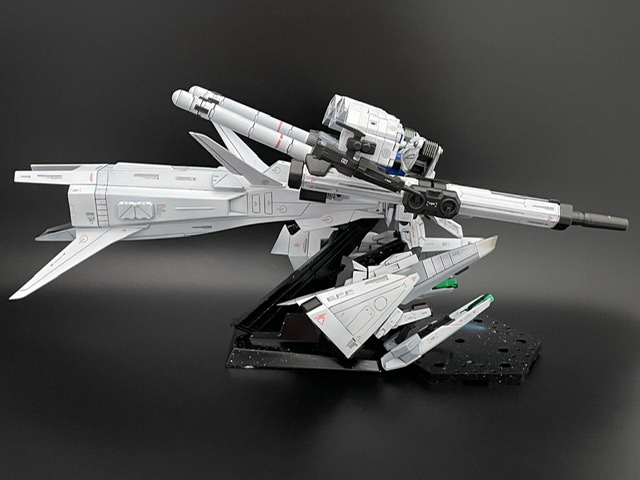 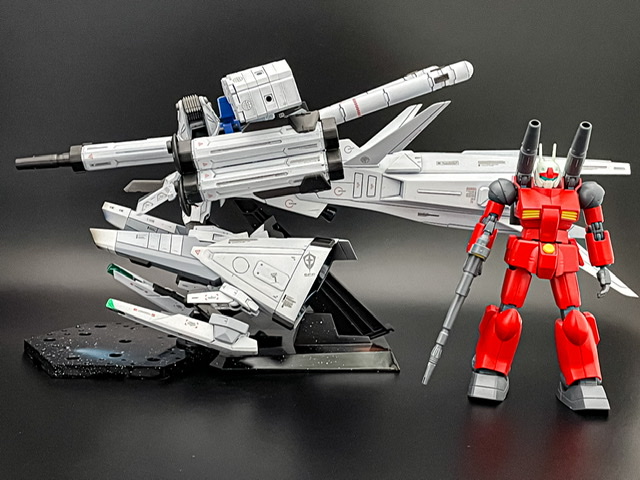 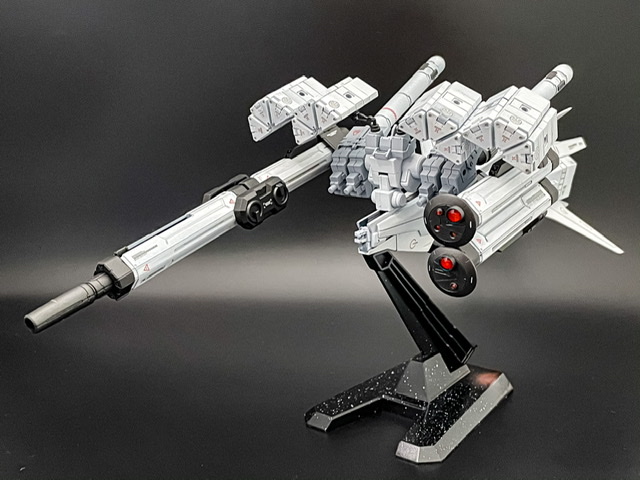 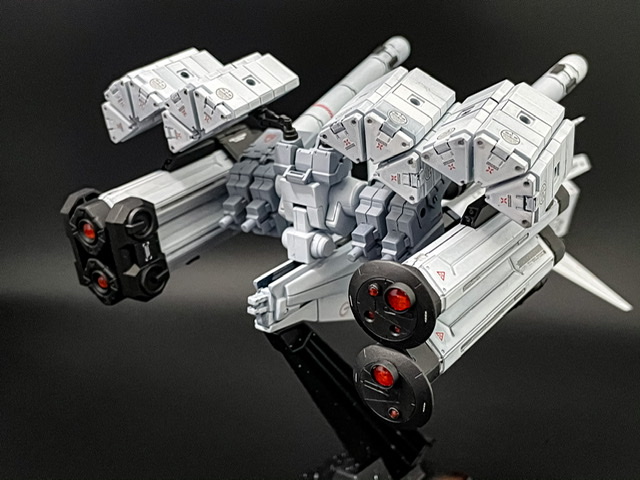 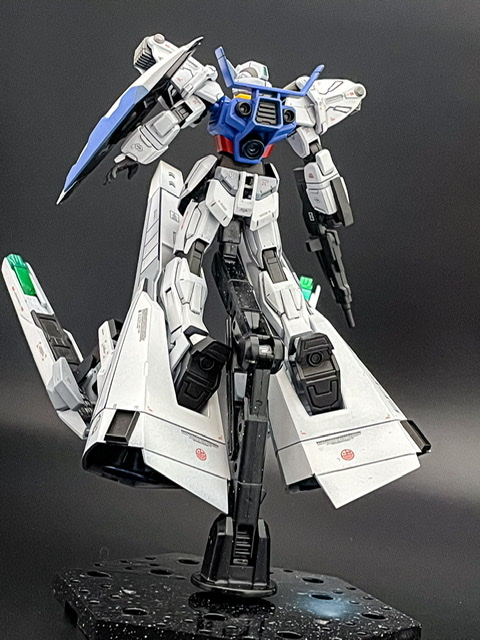 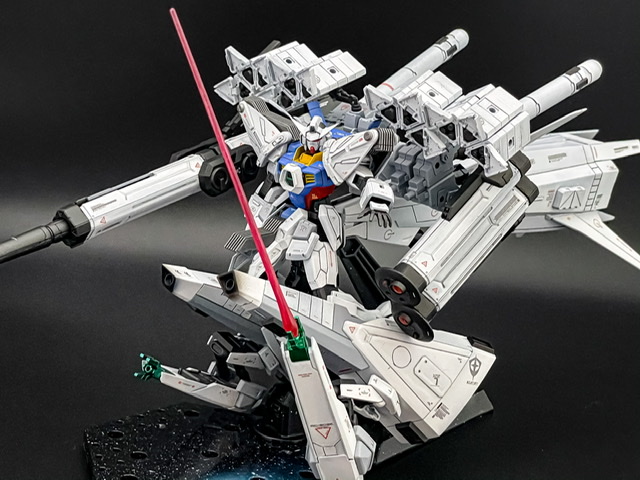 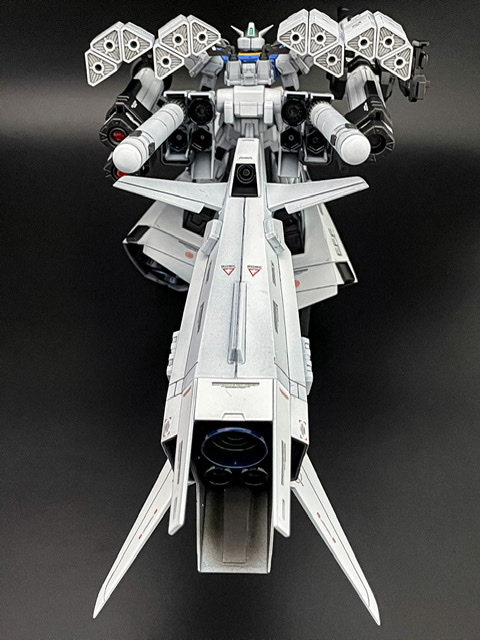