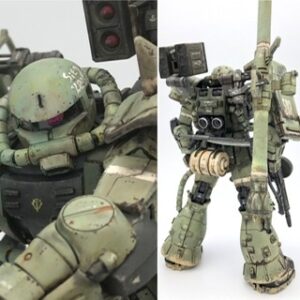 Even if I was going to finish it with a bare body, I was impressed by the goodness of the work and started to improve the details, I thought that I would make AFV-like stains with the knowledge I gained on the net, and if so, I added details to make a setting like that It became this shape by thinking about armored mounts.
I couldn’t do everything I thought about, the surface treatment was sweet, the accuracy wasn’t high, and there were various deficiencies and dissatisfactions, but the satisfaction when it was completed was tremendous, and I felt like I was a boy.
In Universal Century 0079, with the opening of the Zeon Independence War, an innovative mobile weapon mobile suit appeared, and the aspect of the war changed at once.
MS-06, commonly known as Zaku, is a masterpiece of the Principality of Zeon, which boasted unrivaled during the war. Its dominance continued even after the battlefield moved from space to the surface of the earth. The Principality of Zeon, which was originally supposed to invade the ground, was developing a mobile suit for space so that it could be used on land. Following the flow of the MS-05, which can be said to be the first full-scale mobile suit, this 06 series boasts one of the best variation machines in the history of MS.
This machine J type is also a kind of variation machine.
Developed based on the F type, which is a standard MS for space, the J type has been converted and abolished as an aerial vehicle for ground use, strengthening the durability of each part under gravity, changing the cooling system, and optimizing software. It was reborn as a ground-based MS.
This machine is a type called medium-term production type, and improvements have been made from the initial type as needed, and there are changes in the durability of the legs and the armored mounting method, for anti-personnel anti-combat vehicles. System is also built in.

Unlike operation in zero gravity, stress is always applied under gravity, and even if you move your arms, the rigidity of your lower body is affected, so it seems that the data obtained in actual operation was more than expected. It can be said that this J type is also characterized by being improved steadily depending on the production time. In particular, the legs are remarkably strengthened in rigidity and durability.

The fact that the triple missile pod, which was a leg-mounted type for weapons, has been relocated to the shoulder is also a result of actual operation. The original legs could not be used for ridge shooting, and their use was restricted when there were many shields such as urban areas and forest areas. Above all, the legs had to be directed toward the target, which was to solve the problem that significantly affected not only the line of sight but also maneuverability.

In the space battle where the mother ship is in the theater, it was possible to leave the front maintenance to the wingman, supply ammunition and replace the armament, but in the ground battle where the mobility drops dramatically, it does not remain and the operation is carried out with multiple main weapons. Often. Initially, it was diverted to the F-type option mount, but it was the same as the strength of the frame and joints, and countermeasures were devised because the mounting device was frequently damaged when maneuvering under heavy equipment under gravity.
In order to increase the strength of the mount arm, it has been changed from the back of the chest, which has more structural strength, instead of from the backpack. This is a measure to easily increase the strength at the time when there is little operational data, and it is not often seen in the subsequent era.

After deploying the descent operation, MS-06 had achieved overwhelming results like the space battle. Although it maintained its superiority against the Type 61 main battle tank of the Earth Federation Forces, the battery installed at the base, and the attack aircraft and bombers that invaded the low altitude, there were reports that it was sunk by guerrilla tactics by infantry. .
In this MS, for infantry who hide in the shadows and trenches and aim at the leg joints with a portable rocket cannon, various strengthened sensors are added using the thruster space of the legs provided in the F type, and the cannon in the crotch part A ground-based farance system has been added that can automatically supplement and intercept targets in conjunction with.

The operational concept of the MS-06J on the ground of the Principality of Zeon can be said to be a huge infantry. Unlike various MSs that specialize in operation methods that will appear later, operations can be seen in all operations, and there are various targets. Performance may be inferior to later specialized MS, but its versatility is undoubtedly the giant infantry that supported the ground forces of the Principality of Zeon.

On the way, I was working on it for hours every day, so I had no choice but to complete it as soon as possible. Before, at the end of making a model, I had no confidence in myself because 5 bodies had been left unfinished with the finished product in between, so I thought “I should throw it out on the way”. I’m glad it was completed.

It’s the back of the junk parts, but I learned that if you apply it, you won’t be bothered.
The bulge that surrounds the ankle sole part is to prevent subduction and mud rebound in muddy areas.

It was before the photo above, but it was when the armed mount was completed. The mount of the main weapon can be selected with Zaku machine gun and Zaku Bazooka. I removed the arm part and replaced it with the base part so that it can be used as a normal weapon.

Increased front armor and self-made armament, smoke discharger I searched for afterwards.
The smoke discharger had a hard time unexpectedly. AFV style is this! I thought, I made it myself, searched for parts, worried about the installation location endlessly, and as a result I chose the side of the knee, but in the Universal Century it is smarter (08 Squadron Norris Zaku, ,,)

By combining WAVE and Kotobukiya’s detail-up parts, I made my own mono-style hand grenade used by UC Dom.
It is completed by combining the cut out parts. Since there is no duplication technology, it is a combination of ready-made products so that it can be reproduced many times (because it may be equipped later with Gouf or Dom).

The leg on the right side is in the state before it gets weathered.

I wanted to make it look like Sentinel 0079, so I thought, “I applied it quite well”, but when weathering is applied (it is natural), the color changes steadily! I was confused that I couldn’t go back anymore, but I’m glad I did the result.

Thank you for watching until the end.
Evolution of the kit (released 12 years ago) Enrichment of materials and tools (plate file, compressor, weathering color, etc.) How-to acquisition (Youtube, website) It’s just a feeling of alienation, and it’s fresh every day to see and know I remember it.
I returned to Gunpla for the first time in 16 years, but I was able to overcome the illness that could not be completed, and it was a very memorable return work. 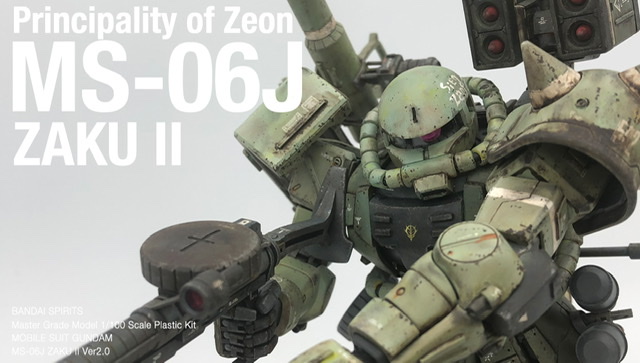 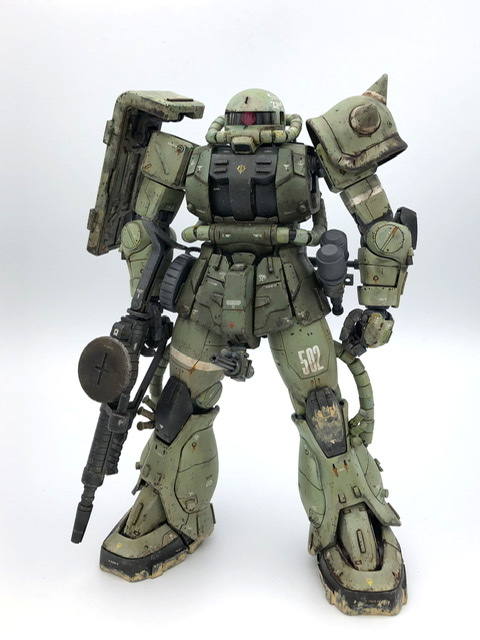 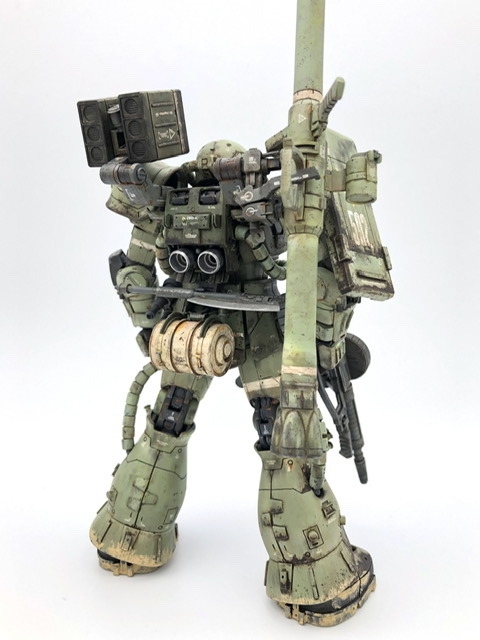 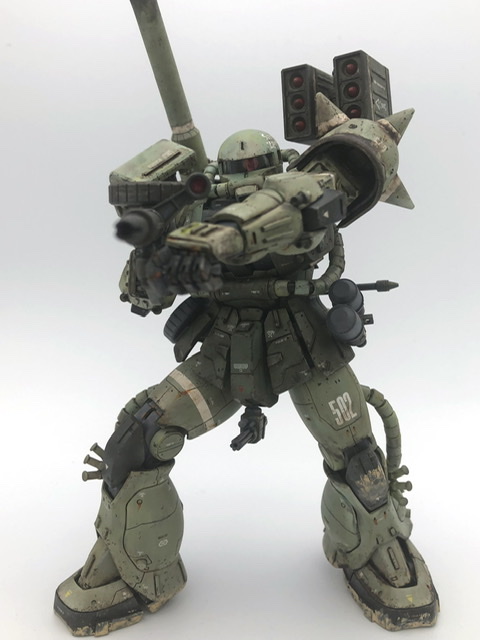 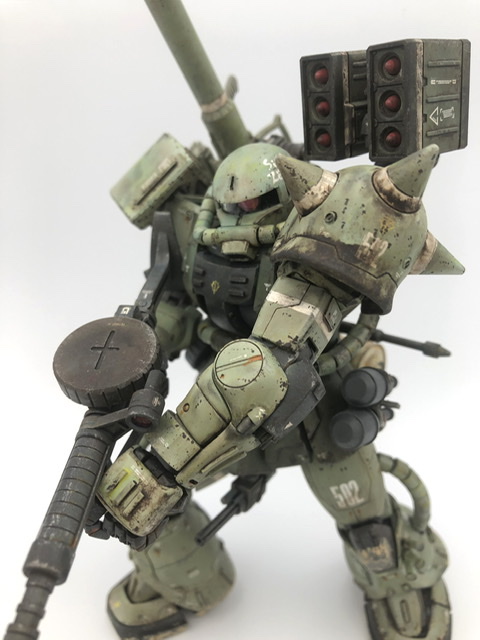 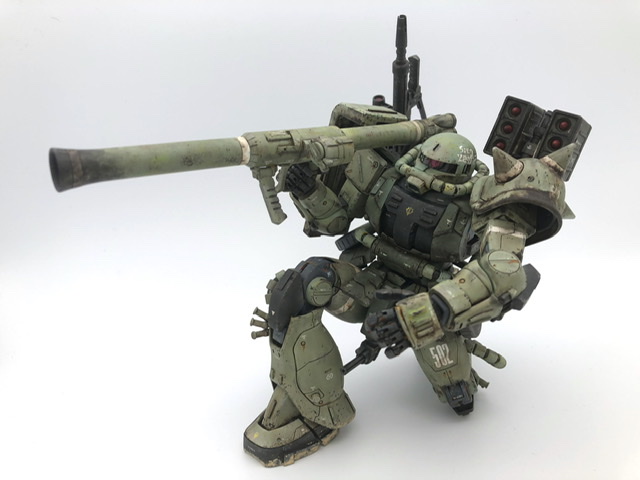 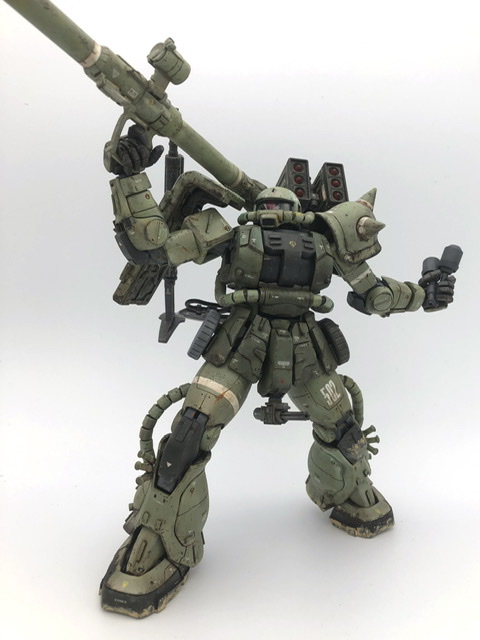 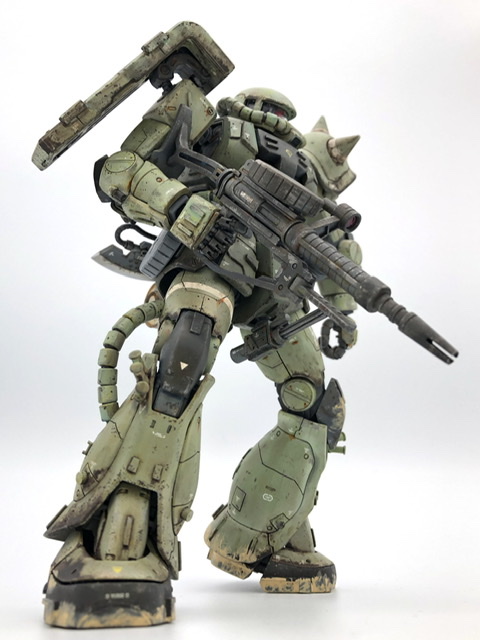 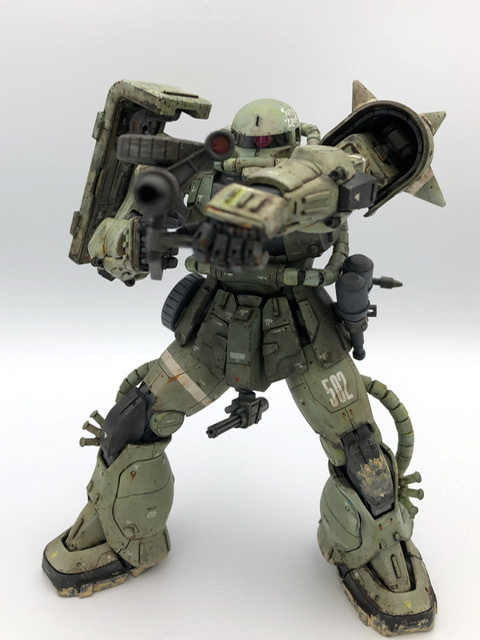 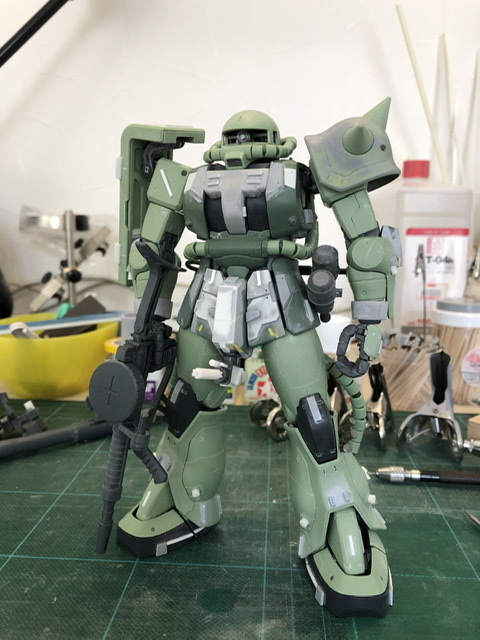 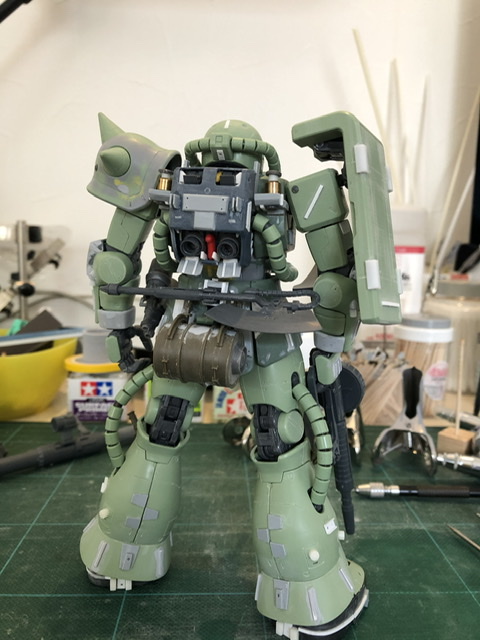 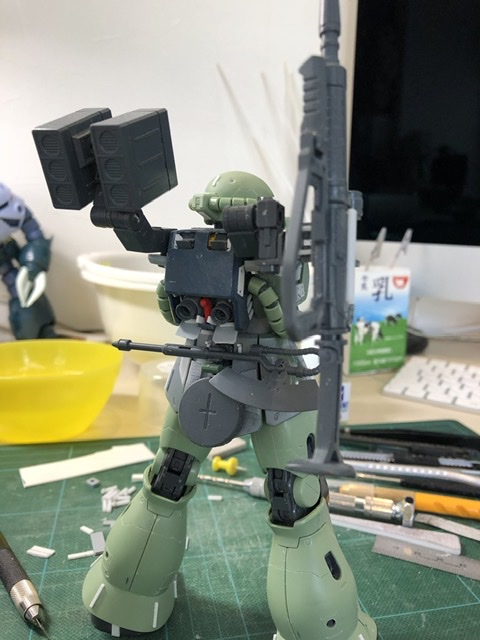 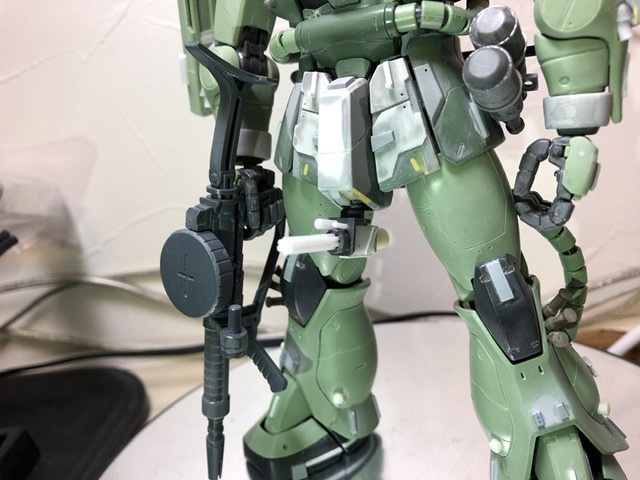 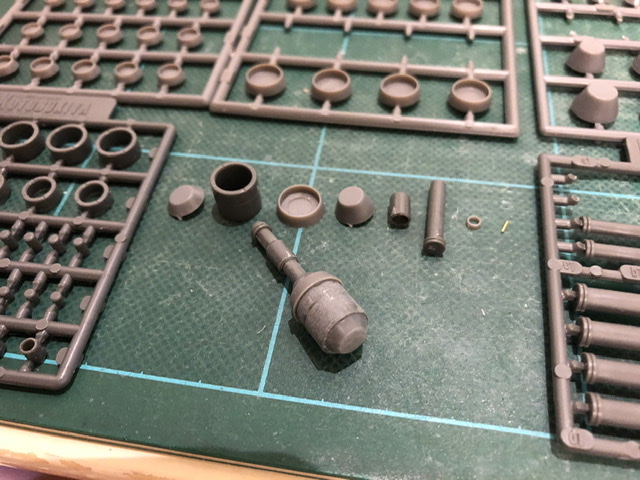 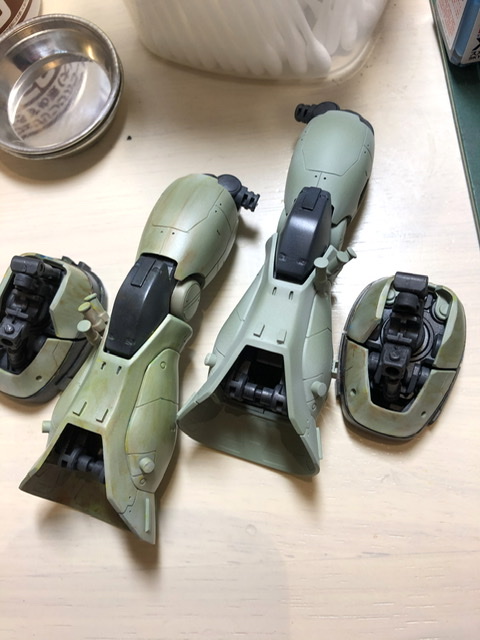 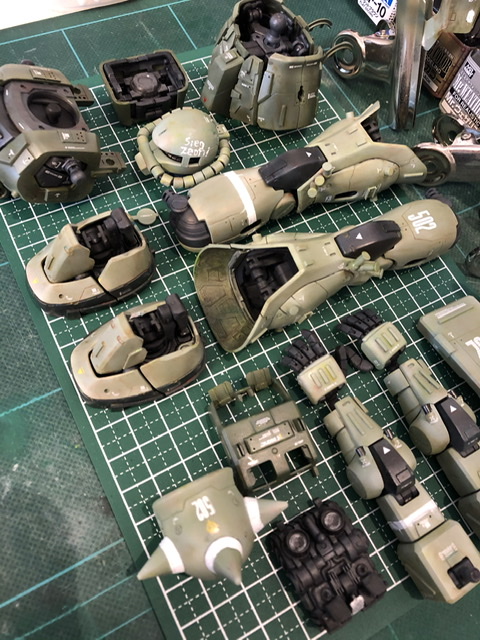 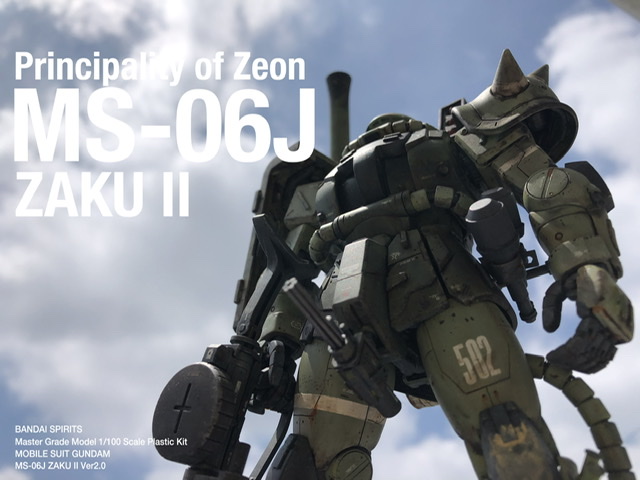